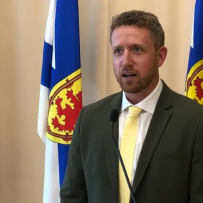 Nova Scotia’s premier says a rent increase cap put in place during the COVID-19 pandemic will stay in place as long as housing is scarce.

“I don’t see an end to rent control right now, when we’re looking at low availability of housing in the province right now,” Iain Rankin said at Province House on Thursday.

That comes after Rankin said the same thing, during his State of the Province address at the Halifax Chamber of Commerce Wednesday.

“Right now, we have an unhealthy mix of supply,” Rankin said. “We need to ensure that we’re working with municipalities to approve developments (and) incentivize growth and supply,” he added.

While cranes and construction seem to be everywhere in Halifax this spring, some renters in the city say what’s missing are affordable places to live.

Oscar Richards says his rent went up by $200 a month after his first year at his apartment.

“You can say no, but you’ll leave,” he said. “And no one else will really take you because there’s a really low vacancy rate in the city.”

That rate did increase slightly this year, according to a January report from the Canadian Mortgage Housing Corporation.  It found Halifax’s vacancy rate to be sitting at two per cent.

The idea of some form of long-term rent control is appealing to renters like Audrey Green, who says she’s seen rent at some places go up by $100 per month over the past year.

“We need something, there’s just nothing right now,” she said.

Affordable housing advocates say extending the rental increase cap is a good first step. However, they also say much more is needed to address the province’s housing crunch.

“We need rent control that is tied to income,” said Hannah Wood of ACORN Nova Scotia, a low and moderate renters union and advocacy group. “That’s something already done in mobile home communities in the province.”

Wood also said more of a focus should be placed on building housing people can reasonably pay for.

According to the CMHC report, the average rent in the city is more than $1100.

For the Investment Property Owners Association of Nova Scotia, the declaration by the premier around rent control is “disappointing.”

Association representative Kevin Russell says the cap on rent increases is hurting many landlords because it comes at a time when repair insurance costs are rising.

Russell says 4,800 rental units are under construction in Halifax but many won’t be ready for another 20 months or more and aren’t all necessarily what would be considered affordable.

“The older owners are deciding now is the time to get out,” said Russell. “They’re tired, and the rent control is not helping.”

“Be disincentivizing the investment property owners” said Russell. “There could be less product on the market in the future until things get sorted out.”

The potential reduction in rental properties is also something Nova Scotia’s PC Party is concerned about.

“Rent control will squeeze supply even more so,” said Tim Houston at the legislature Thursday. “Matter of fact, I’m hearing from people who are saying we’re not renting, we’re getting out of the rental business, we’re selling our two-unit place. That’s the ramification of rent control.”

The premier has said he is waiting for recommendations from the province’s affordable housing commission, which has been consulting stakeholders and residents on the situation in Nova Scotia.

The commission’s report is expected to be delivered to the province by the end of May.