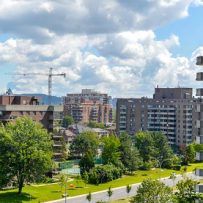 In recent months, more multi-family buildings were constructed than any other housing type in Canada’s hottest markets, according to a new report by the Canada Mortgage and Housing Corporation.

The Crown corporation said that despite the nationwide housing starts trend falling to 203,554 units in February 2019 (from the 207,742 units exactly a year before), multi-family complexes represented much of recent home construction activity.

Meanwhile, Toronto’s lower February numbers mainly stemmed from low condo apartment starts, although demand for the asset class is not stopping any time soon as “sales of new condominium apartment starts have been strong in 2017 and 2018 and these units will continue to break ground throughout this year at a varying pace.”

On the other hand, Montreal’s total housing starts decreased by 47% year-over-year in February, but “rental apartment construction has continued to show strong growth. The low vacancy rates, the aging of the population and the greater proportion of young households now opting for the rental market have continued to stimulate rental housing starts,” the CMHC stated.