MOVING DAY LEAVES AT LEAST 173 MONTREAL HOUSEHOLDS WITHOUT A HOME 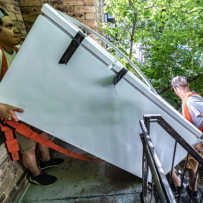 It was moving day in Quebec, but not all those moving had somewhere to move to. Between 80,000 and 100,000 Montreal residents were expected to move on Wednesday, but by midday 173 households were still seeking a home.

“It shows that the famous housing crisis, which affects a large number of households in Montreal, is real. We have been denouncing this for weeks — months. Today’s numbers show the size of the problem.”

Laflamme expected more renters in trouble to come forward over the course of the day, and in coming days. Her team was busy answering phone lines Wednesday, directing tenants across Quebec to resources in their region.

The city of Montreal had provided emergency housing in hotels for 20 households by Wednesday, but Laflamme thought that number may change as well.

“It could go up to 35 tonight,” she said. “Many renters are in a very precarious situation. They’re still searching for an apartment. Their problems are not solved, and they won’t be after July 1.

Others could be evicted when the Quebec rental board reopens eviction hearings on Monday, Laflamme noted, adding the situation in Montreal could take weeks to normalize.

“Even if people don’t end up on the street, they’re living with great insecurity and anxiety, not knowing where they will live. These are real dramas being experienced by families and people living alone, who have to leave apartments and neighbourhoods where they have lived for years.”

Skyrocketing rents, renovictions and Montreal’s vacancy rate of 1.5 per cent are at the heart of the crisis, according to Laflamme, who says the Quebec rental board is not doing enough to protect tenants.

“It’s about the right to the city, not just to housing,” she said. “It shows the importance of putting measures in place so that the city remains affordable to all tenants, whatever their revenue.”

All those seeking emergency help finding lodging will be taken care of, says Robert Beaudry, the city of Montreal’s executive committee member in charge of housing. The city’s housing committee has been holding meetings every two weeks since April, he explained, and is doing everything it can to help.

People in need are encouraged to call 311 in order to be directed to the appropriate resources. The city has received 469 requests for housing assistance so far, including from the 173 households mentioned above that require continued support and accompaniment in their search.

“Concretely, city inspectors are patrolling the boroughs, trying to locate people we didn’t reach via 311, in order to answer their needs and to find out if they require housing or storage,” Beaudry said.

“It’s very disconcerting,” Fontecilla said. “The Montreal rental market is like the Wild West. In Villeray, the vacancy rate is one per cent. In Parc-Extension, there are a lot of low-income households with tenants facing eviction and renoviction due to gentrification.

“The Quebec government has put in place some measures to help with the crisis for July 1; I hope they suffice. We will see at the end of the day. But the housing crisis is year-long. The government is activating emergency measures without fixing the problem by fostering a greater number of rental units, through private and social housing, that corresponds to the demands of the population in Montreal and throughout Quebec.”