MOST RENT HIKES ON P.E.I. WOULD BE CAPPED AT 3% UNDER NEW RESIDENTIAL TENANCY ACT 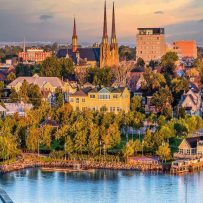 Residential rent increases will be capped at three per cent per year under the new Residential Tenancy Act tabled in the P.E.I. Legislature on Tuesday.

Under the new act — which has been in the works since 2019 and replaces the 30-year-old Rental of Residential Properties Act — any landlord who applies for a larger increase will also have that capped at three per cent, meaning the greatest allowable rent hike in one year would be six per cent.

Landlords who do not charge the maximum allowable increase each year can increase the rent accordingly if the existing tenant leaves voluntarily.

IRAC’s rental caps drew criticism and outrage from many Islanders including the Opposition, tenants, and affordable housing advocates.

On Nov. 3, a bill introduced by Housing Minister Matt MacKay was passed in the legislature, setting rental increases for 2023 at zero per cent, meaning IRAC’s proposed rental increases would no longer apply. The province said that freeze will remain in place if and when the new tenancy act passes.

A group representing Island landlords expressed frustration, saying they had not been consulted and a zero per cent rental increase cap would be unsustainable given P.E.I.’s record-breaking rate of inflation. The landlords said the cap might even force some people to sell their rental units altogether.

On Tuesday, when tabling changes to the new act, MacKay said the government considered about 250 written submissions, as well as consultations with the public and landlord and tenants’ rights groups.

“Obviously there was a lot of concerns, a lot of issues for this whole process,” MacKay told reporters, noting work on the legislation had begun under the previous Liberal government of Wade MacLauchlan.

“I do feel confident with the piece of legislation that we tabled here today. Is it perfect, is it going to keep everybody happy? Absolutely not. But at the same time I think it’s as close as we’re going to get it.”

In addition to the new maximum allowable rent increases, key points of the new legislation include:

A previous draft of the bill was tabled in the fall of 2021, but government ultimately pulled that version, in part to incorporate changes called for by the Official Opposition.

Housing as a human right

Green MLA Karla Bernard said she was encouraged to see in the opening line of the preamble to the bill a recognition of housing as a human right, something her party had pushed for.

Bernard said that will provide guidance to a judge or any other authority trying to interpret the meaning and intent of the legislation.

“The default is going back to human rights, how are human rights impacted by that? So it’s a little sentence that packs a lot of punch.”

Something the Greens asked for that isn’t in the bill is a measure outlining the rights of tenants to keep pets. The bill only includes a prohibition against landlords preventing tenants from keeping service animals.

“With all the information coming out from the P.E.I. Humane Society and from different animal rights organizations saying that the Residential Tenancy Act is the right place to address these animal rights issues, we were very disappointed to hear government say they just didn’t find a way that they could incorporate that,” Bernard said.

Earlier this week, the P.E.I. Humane Society reported it was seeing a surge in people surrendering their pets for adoption because they couldn’t find affordable housing that allowed them to keep companion animals.

The province said regulations will still have to be drawn up for the Residential Tenancy Act. While no enactment date is included in the legislation, government says the new law could come into force as early as spring 2023.