Most Canadians would have trouble with 10% hike in mortgage payments: poll 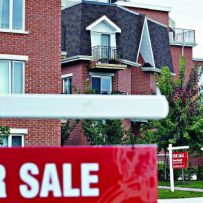 Nearly three quarters of Canadian homeowners say they would have difficulty paying their mortgage if their payments were to increase by more than 10 per cent, says a new survey by Manulife Bank.

Twenty-two per cent said they could handle a payment increase of between 11 to 30 per cent, while the remaining 7 per cent didn’t know or were unsure.

“What these people don’t realize is that we’re at record low interest rates today,” said Rick Lunny, president and CEO of Manulife Bank, adding that a 10-per-cent increase in mortgage payments could be the result of as little as a 1-per-cent interest hike.

“When you put it into that context, they’re not really prepared for what is inevitable. Sooner or later, interest rates are going to rise.”

The survey found that 45 per cent of millennial homeowners — those aged between 20 to 35 — would have the most difficulty making their mortgage payment within three months or less if the primary income-earner in their families were to suddenly become unemployed.

Lunny said many millennials are unprepared to deal with a financial emergency due to a lack of financial literacy and soaring amounts of debt. That group has seen their mortgage debt rise more than any other generation, according to the survey.

The polling industry’s professional body, the Marketing Research and Intelligence Association, says online surveys cannot be assigned a margin of error because they do not randomly sample the population.