Mortgage rules: What do the changes mean? 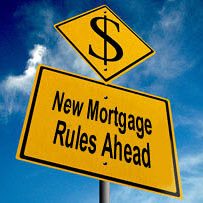 The federal government is instituting significant changes to Canada’s mortgage rules aimed at ensuring homeowners will survive an increase in interest rates.

A major shift in mortgage rules means that Canadians taking on loans to buy homes may not qualify to borrow as much as they previously could.

The rules announced by federal Finance Minister Bill Morneau are aimed at making sure homebuyers aren’t taking on mortgages they can’t afford if interest rates rise. The change means that all homebuyers, regardless of how much they have for a downpayment, will be subject to a mortgage rate stress test beginning Oct. 17 that has, up until now, been reserved for those with less than 20 per cent down.

Buyers with a downpayment of between five and 20 per cent – who hold what are known as high-ratio mortgages – must be backed by mortgage insurance to protect the lender in the event the homeowner defaults on the loan.

Because they are considered higher risk, those buyers must pass what’s called a mortgage rate stress test to qualify for insurance backed by the federal government through the Canada Mortgage and Housing Corp.

That stress test measures whether the buyer could still afford to make payments if mortgage rates rose to the Bank of Canada’s posted five-year fixed mortgage rate.

That rate is usually significantly higher than what a buyer can negotiate with banks or other lenders. For instance, TD has a five-year fixed rate mortgage at 2.59 per cent, while the Bank of Canada’s rate is 4.64 per cent.

The stress test also sets a ceiling of no more than 39 per cent of household income being necessary to cover home-carrying costs such as mortgage payments, heat and taxes.

Until now, buyers with more than a 20 per cent downpayment have escaped such scrutiny.

The federal government says it’s responding to concerns that sharp increases in housing prices in Toronto, Vancouver and elsewhere could increase defaults in the future, should historically low interest rates finally start to climb.

The government is also instituting changes aimed at foreign buyers, big banks and lenders and mortgage insurance on homes valued at more than $1 million.

As it stands, those buying a home with more than 20 per cent down could obtain low-ratio insurance to protect the loan against default. That insurance is sold through two private insurers, but is backed by the federal government, subject to a 10 per cent deductible.

Beginning Nov. 30, new criteria will be in place governing the low-ratio insurance. To qualify, the mortgage’s amortization period must be 25 years or less, the purchase price must be under $1 million, the property must be owner-occupied and the buyer must have a credit score of 600 or more.

The new rules also mean that, beginning this tax year, all home sales must be reported to the Canada Revenue Agency. The gains from sales of primary residences will remain tax-free, but the government is aiming to block foreign buyers from purchasing and flipping homes while falsely claiming the primary residence exemption from capital gains tax.

Finally, the government says it will shift some of the risk of defaults against insured mortgages to banks and other lenders. Ottawa says its shouldering 100 per cent of the cost of a defaulted mortgage is “unique” in the world. How the government plans to share some of that risk with lenders remains to be seen. But experts say, while it protect the government from widespread defaults, it could lead to higher interest rates for borrowers.

He predicts consumers will bear the brunt of the blow and that housing prices will tumble because a “sizable minority” of first-time and high-ratio buyers will no longer qualify for the mortgage amount they want.

There are now fewer options for rental properties.

In the wake of new mortgage rules, some mortgage lenders are pulling mortgage programs for rentals.

One of the first was Merix/Lendwise, which announced a change to its offering Tuesday – a day after recent housing rules were put into place.

In a note to brokers, the lender said it would no longer be accepting rental applications.

First National, another major lender, has made similar changes to its offering.

“(First National) have temporarily suspended their conventional rental program and their Alt-A program, which is part of the business for self-program,” Ernie Stapleton, a representative for First National, told CREW. “As the dust settles, I think First National will re-evaluate their programs in the context of the new rules to see what can be offered.”

And it isn’t just rental properties that are being impacted.

Another lender, MCAP, will soon charge a 15 basis point surcharge for all new refinances beginning November 30, 2016.

These sorts of lender updates are the result of the government’s recent changes to low-ratio mortgage insurance requirements.

Effective November 30, all mortgages originated by lenders who use portfolio insurance – which includes all monoline lenders – must meet the following criteria;

The full scope of the changes can be viewed here.