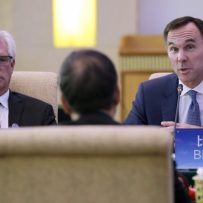 Finance Minister Bill Morneau said he’s remaining focused on enhancing the trade relationship between Canada and China – and keeping that separate from the legal issues at hand – in the wake of escalating tensions over the arrest of Huawei CFO Meng Wanzhou.

“Our goal has to be to keep these things separate,” Morneau told BNN Bloomberg’s Amanda Lang in an interview from the Toronto Global Forum on Wednesday. “So we have to look at trade as something that’s in the important long-term interest of Canada and China, and look at the legal issue separately.”

Morneau’s comments come one day after Meng was granted bail from a British Columbia judge and after U.S. President Donald Trump said in an interview with Reuters he would intervene in the Huawei situation if it meant securing a lasting trade deal with China.

The finance minister said he can’t predict what might happen if Trump does step in, but re-emphasized Canada’s position of keeping the political and legal issues separate.

Adding to concerns that the dispute between China, the U.S. and its allies could escalate further, it was revealed Tuesday former Canadian diplomat Michael Kovrig had been detained during a visit to Beijing.

“Obviously it’s a challenging situation that we’re in right now and we are making sure that we make appropriate representations to the Chinese government about the Canadian that’s been held in China – that’s important,” Morneau said.

“And we will go forward and make representations as necessary and continue on a role of having enhanced trade relationships – that just has to be the right thing for us to do for Canada,” he added.

“My job will really be very much to focus on how we can continue to have a strong relationship.”