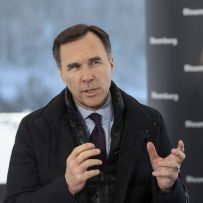 Despite trade headwinds and an oil shock, Canada’s economy remains on track to grow this year and in the “forecastable future,” Finance Minister Bill Morneau said.

Morneau, speaking in an interview Friday at the World Economic Forum in Davos, Switzerland, said a November shock in Canadian crude prices is negatively impact the nation’s economy, but private sector economists continue to anticipate the expansion will continue.

“There are headwinds, I don’t want to dismiss that as a challenge, but we do still see a period of growth,” Morneau told Bloomberg TV’s Francine Lacqua and Tom Keene in Davos. “Right now, we are continuing to forecast growth this year and for the forecastable future.”

Canada Is Going Through a ‘Diplomatic Moment’ With China, Says Morneau

Morneau is preparing Canada’s annual budget, which will serve as a de facto campaign document for Prime Minister Justin Trudeau’s government as it aims for a second mandate in an election this fall. The November oil shock was spurred by a supply glut and pipeline crunch. Prices have recovered somewhat, but clouds remain for Canada’s crude outlook.

Asked about a recent slowdown in growth in the Canadian economy, Morneau pointed to the oil sector as a factor.

“I think you just identified what the soft patch is — the oil shock obviously hit our resource sector in Alberta, so we had a slowdown in Q4 against our expectations, but we do still think that we’ll have a positive year this year,” he said. “I think that particular shock is working its way through the system.”

Canada continues to have decades-low unemployment, and the government will continue to focus on Canada’s middle class, he said. “There’s both headwinds because of trade, obviously, and recovering from that oil shock, which is going to take some time,” he said. “We have trading relationships with two-thirds of the world’s economies, so we’re well-positioned in a challenging time.”

As a feud with China continues, Morneau said the tensions are having a chilling effect for some travelers and investors, but there are no signs the Asian country is actively trying to hurt Canadian economic interests. I “can’t really directly say that I’m seeing that,” he said, citing recent strong Chinese demand for Canadian government bonds.

“We issued Canadian government bonds last week and we saw exceptionally strong demand internationally, and that included some of our Chinese demand,” Morneau said. “Of course, for investors, there’s a moment where people are having some pause, for travelers, you’re clearly questioning your ability to do the business you want to do. So that is the moment we’re in right now. We’re seeking paths to get past this.”