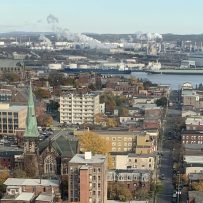 Jessica Wright has spent more than a year and a half on New Brunswick’s wait list for affordable housing, hoping to be placed into an accessible unit in Saint John or to receive a supplement to help pay her rent.

The 31-year-old signed up shortly after she had two aneurysms on the right side of her brain, affecting her balance and mobility, among other challenges.

“I went from I would say a somewhat healthy, normal, physical person at 30, to a very disabled person,” Wright said.

With no timeline to make it to the top of the list, Wright is left in an apartment that she said doesn’t meet her accessibility needs, and costs more than she can afford to pay.

A punch in the gut

While Wright waits, N.B. Housing has about 250 public housing units on average per month across the province sitting vacant, according to data obtained by CBC News through access to information.

When Wright heard that number, she said she felt she’d “been punched in the gut.”

“I’m not living in safe conditions for my situation, and I’m living out of my means,” she said.

“I could be in that situation [in a subsidized apartment]. But because the government’s failing, I’m not.”

Even though not all the available units would meet the criteria she needs, she feels the province could do a better job matching people in need with empty apartments.

“To me, it just doesn’t sound like they are trying.”

In June 2022, the province had 227 vacant public housing units, which is about six per cent of its total inventory, updated data from the province shows. That includes 96 units in the Saint John region, where Wright lives.

That same month, there were also 133 vacant units under the rent supplement program, where private landlords receive money to help reduce a tenant’s rent down to 30 per cent of their adjusted household income.

The units are sitting empty despite increasing need. The province’s wait list for affordable housing grew from about 5,000 households at the end of 2019, up to about 6,000 households last fall.

“What it suggests is that there’s a high need for that type of housing, largely because we know that housing is becoming highly unaffordable across this country,” said Nemoy Lewis, an assistant professor in the School of Urban and Regional Planning at Toronto Metropolitan University.

As the wait list has grown, the number of public housing units owned and maintained by the province has stayed essentially the same, from 3,810 units in January 2020, down to 3,808 units now.

No one from the Department of Social Development was made available for an interview to explain why units are sitting empty.

But a peek inside one region’s vacant units offers some explanation.

The central region, which includes Fredericton and Miramichi, provided a table showing some units were empty because large repairs were needed or staff were waiting for estimates on work that needed to be done.

In a few cases, the table says no one had accepted the unit yet.

“If there’s that many people, there’s no way,” she said. “That just does not sound possible, that nobody out of that list would fit.

“How are they screening people? I would like to know that myself. I’m a single person, I work from home, I’m clean, I have a fixed cat and a hermit crab. I don’t have dogs. How do they do their screening?”

In an emailed statement, a spokesperson with the Department of Social Development said a vacant unit is typically filled by the person “with the greatest need and the highest priority on the waiting list.”

“However; staff in our zones have also recognized the importance of ensuring rental units meet clients’ needs with respect to location and accessibility,” spokesperson Rebecca Howland wrote.

“Staff concentrate on placing clients in units in which they will have the best chance for a successful tenancy.”

When public housing units sit empty for months, Lewis said it could indicate a lack of funding to keep social housing in habitable condition.

“From the last budget, the federal government had put forth some funds to address these particular issues,” Lewis said.

“I think that more needs to be done in order to repair these units, so that we don’t have units that are sitting empty for a year and we have families, who are desperately in need of housing, are not able to take advantage of that housing.”

The province says 20 per cent of its total family rental portfolio and 13 per cent of its units for seniors turn over each year on average, with a “standard turnaround time of 30 days to fill vacant units.”

“There will always be some units that are temporarily vacant as tenants move in or out, and as the department undertakes necessary repairs, upgrades, and routine maintenance,” Howland wrote.

Howland also said the COVID-19 pandemic has impacted the ability to turn over empty units, because of “the lack of availability of supplies and contractors to complete repairs.”

The percentage of vacant units in public housing has fluctuated over the past eight months, from a high of 7.4 per cent in January 2022 to a low of six per cent last month.

By comparison, the Toronto Community Housing Corporation reported a vacancy rate of 2.68 per cent in January 2022.