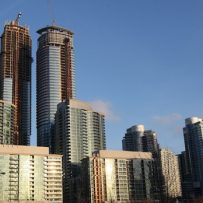 Housing is top of mind in this year’s municipal elections in Ontario and British Columbia. Neither Toronto nor Vancouver has ever been comfortably affordable in recent memory, but now both are jockeying for the top spot in the rankings of North America’s most unaffordable cities.

These unaffordability challenges have led to a growing number of activists, policy voices, and politicians calling for a new politics of YIMBYism (Yes In My Backyard), that favour upzoning and densifying single-family neighbourhoods.

Mayoral candidates, John Tory and Gil Peñalosa in Toronto, and Mark Marissen in Vancouver, for instance, have broadly touted these ideas in their respective campaigns. Their main message is to boost housing supply in order to make it affordable.

Yet there remain some housing advocates who reject these pro-development calls. Instead, they argue in favour of the controversial idea of rent controls in response to concerns about housing affordability.

Rent controls can come in different forms. But, in simple terms, they amount to a government policy that mandates how much private landlords can charge tenants in monthly rental payments. It is a long-standing idea that is practiced in some of North America’s most unaffordable cities. And it is also universally rejected by economists.

“Rent control is a zombie idea that just won’t go away,” says The Hub‘s editor at large, Sean Speer, who has written about housing policy for the Macdonald-Laurier Institute. “Its political appeal is that it’s simple and visible. But its economic challenge is that it fails to reckon with basic ideas about incentives, supply and demand, and the laws of unintended consequences.”

Patrick Condon, a University of British Columbia’s School of Architecture and Landscape Architecture professor and frequent commentator on housing affordability, is a proponent of a form of rent control known as vacancy controls. These controls would cap how much landlords can increase rents when tenants are replaced.

B.C. currently limits how much an existing tenant’s rent can be annually hiked, but dramatic jumps in rents in between tenancies are common. Advocates in Ontario have recently called on the provincial government to similarly implement vacancy control legislation. The average rent for a one-bedroom apartment in Vancouver is listed by multiple rental sites at $2,500 per month, up 16 percent since last year.

“Vacancy control is, under these critical circumstances I would argue, way more necessary than it was even in the 1970s because this situation we find ourselves in is literally unprecedented since the 1920s,” says Condon.

Condon says vacancy control will help mitigate increases in land value because real estate investment trusts look at the value of land, not the physical structure itself.

Most economists, however, warn that rent control is a bad idea. Their opposition stems from extensive evidence showing that while rent control keeps existing tenants in their apartments, rental housing construction often slows down. The end result is that it is much more expensive for prospective renters to find an affordable apartment.

Nobel Prize-winning economist Paul Krugman has called rent control “among the best-understood issues in all of economics, and—among economists, anyway—one of the least controversial.”

In 1995, San Francisco passed a rent control ordinance subjecting multifamily buildings built after June 1979 to the measure. Over 60 percent of San Francisco’s rental units are now rent-controlled, and the city is currently the third most expensive city in the United States.

Waitlists for rent-controlled apartments in other cities can be decades long or distributed in a random lottery system.

A 2019 analysis from the Bank of Montreal has said rent control is not a long-term solution. Instead, most economic analysis points to building more rental units as key to easing unaffordability.

The federal government has pledged a 10-year, $20 billion plan to address unaffordability, including $123 million in tax incentives for developers to build and renovate rental housing.

Even if Condon disagrees with the YIMBY’s solution of more housing supply, he sympathizes with younger Canadians who are struggling with housing affordability challenges.

“I think what they get really correct is that there’s a huge problem in housing affordability that elevates to the level of crisis, particularly for their generation,” says Condon.

Story by: The Hub