MORE PEOPLE MOVED TO ALTA.; NORTH BAY, ONT., THAN ANY OTHER PROVINCE OR CITY: U-HAUL REPORT 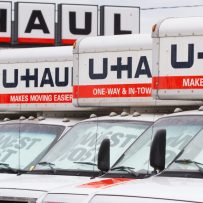 U-Haul has named Alberta as the country’s top growth province for 2021 as more trucks moved in than out compared to the previous year.

Alberta netted more one-way U-Haul truck customers than any other province, followed by British Columbia and Ontario, according to the company’s collection of migration trends for the year.

The province saw a 33-per-cent increase in trucks arriving in 2021 compared to the previous year, while departures rose by 29 per cent.

Overall, U-Haul reports that nearly 51 per cent of all U-Haul traffic in Alberta was inflow.

Meanwhile, for the second year in a row, North Bay, Ont., topped the list of growth cities in Canada after experiencing a greater net gain of people moving in than out.

“There are initiatives in Alberta that are creating more job opportunities and attracting residents,” Naga Chennamsetty, U-Haul area district vice-president of Western Canada, said in a statement.

“In the last year, we have seen (a) lot of movement into Alberta. More communities are developing in and around major cities. Not only that, but the Canadian Rockies are so accessible to residents here, and they offer a variety of recreational activities. Alberta is one of (the) best places to make a home.”

The rankings are detailed in U-Haul’s annual Growth Index, released Wednesday, which uses data from one-way U-Haul truck transactions to calculate how many trucks are arriving in a given city or province and how many are leaving in the same calendar year.

U-Haul notes that the index is not a direct measure of population or economic growth.

For example, the latest information available from the Alberta government shows that in the second quarter of 2021, the province added an estimated 4,107 residents, with gains in international migration, although those were offset by a net outflow of interprovincial migrants. Third quarter population estimates are expected to be released this month.

However, U-Haul says its index can serve as a gauge for how well cities are doing as far as attracting and retaining residents.

In its report, U-Haul points to a recurring theme from 2020 of people moving from “densely populated urban areas to less crowded, more affordable outlying markets.”

“Obviously, this is good news for Alberta, for our communities,” Economic Developers Alberta CEO Leann Hackman-Carty told CTVNews.ca in a phone interview.

“As you can imagine, the last couple of years have been really hard in all communities, not even just within Canada but globally with COVID.”

Hackman-Carty points to a number of “tiny elements” she believes help explain the overall picture, including being competitive from a tax and business standpoint, attracting investment and post-secondary students, attempts to train people faster for new jobs and industries, and the general resilience of Albertans.

However, one of the lessons learned from COVID-19, she said, is that people can work from anywhere, “and I think that’s what’s driving some of this.”

Whether it’s to be closer to family, cheaper cost of living or a lifestyle choice, as long as people have access to high-speed internet, decent health-care and schools, and basic amenities, Hackman-Carty says people are willing to make that move in order to achieve a less stressful life.

“I do think people have been stuck in their houses, really evaluating what’s important and simplifying their lives,” she said.

For the second straight year, North Bay, Ont., a city of about 51,553 people located approximately 300 kilometres north of Toronto, led the list, with one-way arrivals rising 40 per cent year-over-year, while departures rose 27 per cent.

Of all one-way U-Haul truck traffic in North Bay last year, more than 59 per cent were arriving customers.

The second and third top growth cities were Belleville and Greater Sudbury, respectively, both in Ontario. However, a number of other smaller municipalities also made the top 25 list.

In a statement, North Bay Mayor Al McDonald said while the pandemic has created many challenges, it also helped make the city more appealing “with its abundant green space, parks, trails, beaches, employment opportunities, along with affordable housing,” given its close proximity to the Greater Toronto Area.

“We have heard anecdotally from the real estate industry and many others in the community about an increasing number of people choosing to move to North Bay during the pandemic. Additionally, we have continued to make economic development a priority and marked our best building year ever in 2021, mainly due to residential construction,” he said.

“We expect this trend to continue throughout 2022 and are looking forward to the release of census data later this year so we can better assess the impact on our population and economy.”

Over the last couple of years, North Bay has emerged as one of many markets to have seen large year-over-year increases in home sales and prices.

Data from the Canadian Real Estate Association, and provided by the North Bay Real Estate Board, shows that home sales in North Bay were 22 per cent above the 10-year average for the month of November, while the overall benchmark price, according to the MLS Home Price Index, was $369,200, a gain of 40.4 per cent compared to a year ago.

At the same time, and similar to other markets, North Bay also is dealing with historic lows in housing supply.

North Bay Real Estate Board president Ryan Humble said investors are buying properties for rental purposes, taking advantage of the city’s relatively affordable housing prices, but many of his clients also have some ties to northern Ontario and are simply looking to relocate.

Along with the general “exodus” out of large urban centres during COVID-19, Humble says the movement of students in and out of the city also may be having an impact.

“People being afforded the opportunity to work from home doesn’t look like it’s going to change any time soon here,” he said.

“So it’ll be curious to see what unfolds this year, but I anticipate we’ll be in much of the same trend with interest rates being as low as they are.”