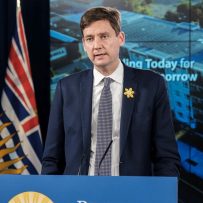 Housing Minister David Eby is rejecting calls for more housing taxes, saying a “massive” increase in the housing supply is his preferred route to improve housing affordability in B.C.
“No tax policy is going to put a roof over someone’s head,” Eby declared this week in fending off calls for the New Democrats to bring in new taxes and thereby discourage demand.

The proposal from UBC-based Generation Squeeze for a surtax on homes valued at more than $1 million?

“I don’t agree,” Eby told Stephen Quinn on CBC’s Early Edition Monday. “We are trying to reduce costs for families right now, and many people are struggling across the province.”

Reduce access to the homeowner grant by means-testing or lowering the $2 million eligibility threshold?

“What’s suggested is an increase in taxes on those homeowners, and we’re just not interested currently in increasing taxes that way,” said Eby.

“We’ve increased taxes on behaviours that are leading to problems in the housing market,” said the housing minister. He citing the speculation and vacancy tax and a property surtax on homes worth $3 million or more, which disproportionately hit residents of his riding of Vancouver Point Grey.

“But keep in mind that the majority of British Columbians are, in fact, homeowners — 64 per cent of people in Vancouver are homeowners still, in the most expensive market.

“And so you’re talking about a broad-based middle-class tax increase at a time when costs are going up all across the board for British Columbians. We’re not going to do it.”

Rather, Eby will spend the year concentrating on supply, supply and supply.

“We need a massive housing boom in rental housing and in housing for purchase, and we need our cities on side for that,” he said Monday. “It’s not just Vancouver, it’s across the entire province. So that’s the core of the issue … it’s not really about the homeowners grant.”

Later in the week Eby expanded on his “profound concern about the housing that we are not building” and what he proposes to do about it.

B.C. is experiencing its biggest population influx in decades. Some 50,000 newcomers arrived here from elsewhere in Canada and from outside the country in the first six months of 2021 alone — and this at a time when, as Eby notes, there were only 6,000 real estate listings active at the end of last year.

“Those are the numbers that keep me up at night,” he told Simi Sara on CKNW on Thursday. “And things are going to get worse unless we start building the necessary housing.”

Adding to his frustration is the spectacle of hundreds of units of needed housing being stalled or rejected outright in communities like Surrey, Penticton and North Vancouver.

Or take the case of the Broadway subway line.

The provincial and federal governments are covering most of the cost of the almost $3 billion cost of the SkyTrain extension and construction is underway. But Vancouver has yet to approve the plan to add “thousands and thousands of units” of rental housing along the route.

At this rate, says Eby, “the subway is going to be done before the Broadway corridor plan is approved.”

While not concealing his disappointment with some local governments, Eby says the province has made progress dealing with others to increase the housing supply.

He cites provincially funded plans to identify local housing needs as a first step toward zoning for the right mix of housing in the right places.

But he worries about the lack of “a common understanding across the province — that we need this housing approved when it comes forward.”

So even as the province remains committed to working with local governments, it is also studying how other jurisdictions — New Zealand, California, Massachusetts — have grappled with municipalities “that are unwilling to approve the necessary housing.”

Some of those possibilities were set out in last year’s report of a joint-provincial commission on housing supply and affordability, headed by former NDP finance minister Joy MacPhail.

Such measures are under consideration, albeit cloaked as an effort to help local government resist the forces of NIMBY.

“We have to support municipalities in being able to stand up to folks who say ‘we don’t want any more people living here,’” Eby said Thursday. “We are in the midst of a very serious housing crisis. Communities should have a say about where the housing goes, but not whether it goes.”

He also supports diluting single-family zoning by allowing homeowners to “build more density if they choose to do that.”

This being a civic election year, Eby said that the province remains committed to working “co-operatively” with local governments.

But he warns, “if that’s not successful, we are prepared to take those additional steps if necessary.”

So, it seems the housing minister is running out of patience.

Eby, who is also the attorney-general in the NDP government, suggested in both radio interviews this week that the province is preparing to go it alone on housing in the fall session of the legislature.

Once the civic campaigns are out of the way, I expect Eby will introduce legislation to expedite development of much-needed housing in B.C. municipalities.