MONTREAL VACANCY HITS 6%, HIGHEST IN YEARS, BUT PRICES DON’T SEEM TO BE DROPPING 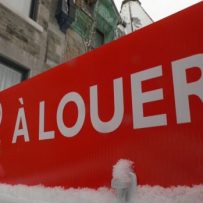 It’s been a long time since there were this many “for rent” signs in Montreal: the vacancy rate just hit six per cent, a far cry from what it’s been for the last few years.

Why is that? Many of the reasons were predictable, given the strange past year, though they didn’t translate into lower vacancy for the first few months of the pandemic. It’s a combination of a drop in foreign students, a drop in tourism, and more Montrealers fleeing the city for the suburbs.

The Quebec Landlords’ Association, which provided the six per cent number, said the vacancy rate for the last two years was around one per cent, an extremely low number by any city’s standards.

It’s not translating into price drops, however, and that means Montreal’s housing debate is continuing along similar lines as last year.

While tenants are harder to find, they’re not so hard that landlords must decrease the rent, said one realtor.

“The other years, when I took a rental, I found it was much faster to rent out an apartment or a house,” said Pia Bongiovanni.

But as for the price, she says, “I don’t see it dropping unless the apartment has been on the market for a while and the renter says we need to drop the price a little bit.”

Tenants groups still want a rent freeze, a measure that Ontario took this fall, freezing residential rates in 2021 at 2020 levels.

It’s a response to the fact that so many people are out of work, say Montreal housing advocates.

But landlords argue that they’re the ones hurting, saying that a lot of renters have been unable to pay rent amid job losses, and that renovation prices have gone up.

They also say that for the coming year, Quebec’s rental board is allowing just $2 of rent increase for every $1,000 spent on repairs, meaning that if a landlord spends $10,000 on a new roof, the rent in that unit can only go up by $20.

“It’s never been so low in history, never,” said Hans Brouillette of the Quebec Landlords’ Association.

His group says that while Ontario may be freezing rents, it doesn’t make sense in Quebec, where there are more social supports.

“It’s not all tenants who need relief,” Brouillette said. “We know that many tenants, they already benefit from social programs.”

Burrill said it’s not right to draw a parallel between tenants struggling and landlords struggling when they mean such different things in concrete terms.

“There’s a difference between the landlord having to reach into his pocket a little more and the tenant finding himself on the street, right?” he said.