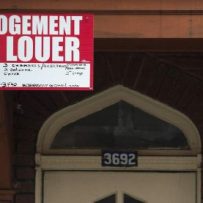 An apartment swap — an unconventional way to find a new apartment that exists thanks to protections for tenants in Quebec law — is not a new phenomenon. But with rising rents and the city’s vacancy rate at a 15-year low, housing rights groups say it appears a growing number of Montrealers are opting to swap.

Since the lease is transferred, the current rent is locked in for its duration — and tenants can contest unreasonable increases with the rental board when the lease renews.

Below market rents — if you have something to swap

Swapping apartments is like stepping into a time machine where Montreal rents are at the level they were five or even 10 years ago.

A two-bedroom apartment in Little Italy for $430 a month. A $550-per-month studio in the Plateau, with parking. A three-bedroom place in Villeray for $989 per month.

“Most people that are looking to swap an apartment are not in any rush,” said Fontaine. That was the case for him and Anna. Their place worked for the time being, but somewhere a bit larger, a place that would fit their skis and snowboards, would be ideal.

And with limited parking in his current neighbourhood, a reserved spot would save him from getting so many parking tickets.

So they had a photographer friend of theirs take photos of their place and made an online ad, with the place listed “for swap only.”

They saw a potential swap posted by two students living in Parc–Extension; it was larger, had parking and even a yard. Because the tenants had lived there for years, the rent was under $1,000.

An apartment swap is not explicitly defined in Quebec law. What the two tenants are essentially doing is a mutual lease transfer.

“Whether it’s a swap or a reciprocal agreement or whatever you want to call it, the law still qualifies the tenant as a tenant,” says Jamie Benizri, a lawyer who represents tenants and landlords with the firm Legal Logik.

That means that once you’ve found an ideal person to swap with, you send your landlord a notice to assign the lease with the name and address of the prospective tenant. Benizri recommends you do a credit check on the candidate and provide the report along with the application form.

“The credit check is going to be necessary, maybe even a docket search at the Régie du logement, to make sure that there’s no pending judgments against that person,” he said.

“Letters of employment are often very, very helpful to build a file. So these three things for me are our pillar documents to show that somebody has the wherewithal and the capacity to replace you as a tenant.”

Landlords have 15 days to give the hopeful swappers a response, and the Régie says that it can only be refused for “serious reasons.”

“Really, you can’t discriminate,” says Benizri. “Now, you can profile and you can do a proper background check to make sure that the person can reasonably afford the rent, but in no other way could you discriminate against the candidate.”

While landlords are required to disclose the cheapest rent paid at an apartment in the last 12 months upon signing a new lease, that does not always happen. And in the current competitive housing market, a new tenant may just agree to pay the higher price.

Benizri says tenants can go to the rental board if you find out, after signing, hat there has been an unreasonable rent increase.

Hans Brouillette, the director of public affairs with the landlords’ lobby group CORPIQ, said the phenomenon of swapping is “kind of taking control of an apartment without the consent of the landlord.”

“It should be the right of the landlord to decide who is going to live there,” he said. “It’s very difficult for a landlord to refuse someone.”

Difficult for those without a good lease

Prospective swappers with a lease below market value have no shortage of requests this year. What’s tougher is finding someone who has what you want in return.

Ann-July Boily-Gagnon is looking for a place to live with her boyfriend. They want to stay in Hochelaga, and she says that through swapping, it now looks like that is going to happen.

After making a Kijiji ad for her $660-per-month studio and posting it in a Facebook group dedicated to swaps, the response “has been quite fruitful,” she said, and she’s now setting up times to see prospective apartments she might swap hers for.

Tom Dunford acknowledges it’s tough for those who don’t already have a good lease to see attractive apartments that are out of their reach.

“It is very frustrating to see all these great apartments at great prices flying around, but if you don’t have anything that’s worth trading, then you’re very much on the outside,” said Dunford, who is looking to swap his place for the first time.

With a studio apartment in Mile End for less than $600 a month, he says he’s getting lots of offers for a place that would be suitable for him to move in with his girlfriend.

“Now, with something of value that people want, the Kijiji response has surpassed my expectations,” he said.

After swapping last spring, Jacques Fontaine says he and his girlfriend are going to renew the lease on their new place.

He said all last year’s swap cost them was $45 to provide their new landlord with a credit report, and it was completely worth it.

“It’s been very, very good for us, and I recommend it to anybody else,” he said.