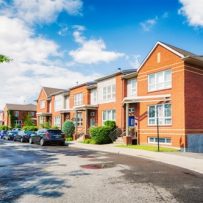 There were 2,899 sales, with condo transactions surging 19 per cent. Single-family homes that account for more than half of sales rose four per cent.

The Island of Montreal led the way with a 12 per cent rise in sales.

In an interview with The Canadian Press, Paul Cardinal of the Quebec Federation of Real Estate Boards attributed the continued gains to strong job creation, consumer confidence and foreign migration.

He also said buyers were fast-tracking purchases to beat an expected interest rate hike, which was announced Wednesday.

Sales have increased each of the last 30 months, except July 2016 when there were unchanged. The last monthly drop in sales took place in February 2015.

That’s far different than in Toronto, where sales of detached, semi-detached, condos and townhouses fell between 25.7 and 41.6 per cent in August.

The average sales price in the Greater Toronto Area dropped for a fourth-straight month, falling 1.8 per cent to $732,292.

Montreal remained a relative bargain even though the average real estate price increased 4.1 per cent to $374,333 in August

One possible area of weakness was a slowdown in the purchase of homes over $500,000. They grew 14 per cent, down from 57 per cent in July.