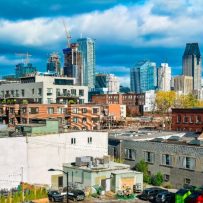 Montreal has been granted $100 million to renovate more than 500 low-rental housing units (LRH) across the island.

In a Wednesday afternoon press release, the Canada Mortgage and Housing Corporation announced the deal. In collaboration with the Quebec and Canadian government, the Office municipal d’habitation de Montréal (OMHM) says 517 units will be renovated, several of which are “currently boarded up.”

Depending on the scope of the renovations required in the various buildings, the work would be carried out over a three-year period based on a schedule to be established by the OMHM.

The boroughs and specific households affected by the new agreement will be announced “in the coming weeks,” says the press release, along with additional details on the next steps.

“Housing is a priority for our government. For several years now, we have had a significant need for social and affordable housing in Montréal, a need that has only been exacerbated by the pandemic,” says Montreal Mayor Valérie Plante. “The $100 million investment that will help renovate over 500 units in low-rental housing projects and benefit more than 500 Montréal households in need is therefore very good news. I welcome the contribution from the governments of Canada and Quebec and their work alongside the City of Montréal and its partners to make housing a crucial issue.”

Ahmed Hussen, the Minister of Families in Canada, says every Quebecer deserves a safe and affordable place to call home. He says the funding will help families and give a boost to the local economy. “At the same time, we are improving the quality of life of those who need it most.”

Plante says the government will “continue working to improve access to quality housing that meets the needs and budget of Montréalers.”

According to the press release, the renovations are expected to begin “over the coming months.”