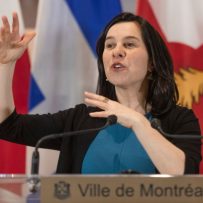 The city of Montreal has identified more than 300 lots in its central boroughs where it will exercise its newfound “right of first refusal” in order to purchase private land or buildings for the purpose of low-cost or subsidized housing.

“What this means is that the city will have a chance to buy, before anyone else, land or buildings that are put up for sale in priority sectors that have been identified,” Montreal Mayor Valérie Plante said in a news conference on Monday.

“In a booming market like Montreal’s, where land and buildings are in short supply on the market and quickly find buyers when they are available, this right of first refusal will make it easier for us to get our hands on lots that can accommodate community and social housing.”

Montreal signed a new deal with the Quebec government in 2016, known as the “Réflexe Montréal agreement”, which granted the metropolis more power, including that the city must be given the option to purchase certain lands for certain purposes. The administration has already passed bylaws identifying properties where it will exercise this right in order to build libraries, schools, sports facilities and parks.

Now, the city is using the tool for housing. City planners have identified sectors that are under transformation in the central boroughs, where the need for low-cost housing is most acute. The targeted lots are in Côte-des-Neiges–Notre-Dame-de Grâce, Mercier–Hochelaga-Maisonneuve, Plateau-Mont-Royal, Sud-Ouest, Verdun, Ville-Marie, and Villeray–Saint-Michel–Parc-Extension. About 100 of the lots for which the city intends to exercise its right of first refusal are near the new MIL Campus of the Université de Montréal, Plante said.

Owners of the properties in question will be informed by letter as soon as the property designations are approved by the agglomeration council. If these owners put their properties up for sale within the next 10 years and get an offer, they must inform the city, which will then have 60 days to analyze the deal, and decide whether to match the price or withdraw.

Two hundred of the properties in question, which were not made public, will be submitted to next month’s agglomeration council meeting for approval, and 100 more at the April meeting.

Plante blamed previous Montreal administrations for not foreseeing the housing shortage and bringing in these types of measures sooner. Her administration budgeted $50 million to buy land for social and affordable housing in its last three-year investment program and has spent about $15 million from that envelope so far, she said.

Plante campaigned on a promise to create 12,000 new social and affordable housing units, and announced in October that financing is in place for just over half of those units. On Monday she said construction is actually underway for 1,300 of those units and “a couple of hundred” are already completed and occupied.

Earlier this month, Plante announced two other housing initiatives: a program to encourage landlords to renovate rental housing and an action plan to crack down on rental units that are poorly maintained or unsanitary.

And in June, the city announced it will bring in a bylaw that will force developers to set aside certain percentages of new housing developments for affordable, subsidized and family-sized units starting in 2021.

Plante said some big developers are already conforming to the new requirements, even before that bylaw comes into play. For example, the Quartier des lumières project, a planned development on the site of the former Radio-Canada building, will respect the requirements, Plante said. (An announcement regarding the first phase of that project is expected Tuesday).

Plante added she hopes the Quebec government is serious about enforcing the new Airbnb regulations it introduced last June, which could also take some pressure off Montreal’s tough rental market. And she reiterated her plea for the federal and provincial governments to agree on a joint funding program for social housing.

Liberal finance critic Carlos Leitão proposed a tax on vacant property, aimed at owners who buy properties and then do not occupy or rent them, or who rent them out on short-term rental platforms such as Airbnb. He said these actions create a housing shortage, which is causing rent hikes and increasing home prices.