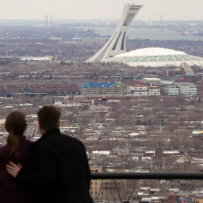 A new Montreal bylaw proposed and passed by Valérie Plante’s administration could reshape the way housing development works in the city, but not everyone is happy about it.

Known as the bylaw for a mixed metropolis, it came into effect on April 1.

It forces developers to include social, family and, in some places, affordable housing units to any new projects larger than 4,843 square feet (about five units) — or else they’re on the hook for hefty fines. And critics say they’re likely to pass on added costs to buyers.

The bylaw is one of the tools the Plante administration is counting on to deal with a serious housing crunch and skyrocketing rents.

The city estimates the new rules will lead to the construction of 600 new social housing units per year.

At first dubbed the 20-20-20 bylaw, it originally sought to include 20 per cent affordable housing in new developments, but was significantly changed during the consultation process. Now, affordable housing is only a requirement in a couple parts of the city.

Despite that, the new bylaw is “probably the most powerful in North America,” says Craig Sauvé, city councillor for the Southwest borough and associate councillor for housing to the executive committee.

Developers say it’ll drive up the cost of housing for ordinary Montrealers.

“Basically, all of the pressure is on the shoulder of the builder to finance these objectives. The only way that this can happen is that the owners of the condo buildings will have to pay more,” said François Bernier, vice-president of public affairs at the Association of Quebec Construction and Housing Professionals.

Housing groups like the Front d’action populaire en réaménagement urbain (FRAPRU) are calling the bylaw a win, saying they’d been calling for similar legislation for years.

“When the city of Montreal announced going forward with this bylaw, we were pleased,” said spokesperson Catherine Lussier.

It’s also likely to be the subject of debate in this fall’s municipal election.

So, what is at stake?

How development worked before the bylaw

Up until April 2021, the city’s main negotiation tool to entice developers to build social, family and affordable housing was offering them incentives, known as dérogations or exemptions.

Montreal’s urban plan included constraints on new builds. If a developer wanted to build something that didn’t fit the plan, then it could ask for a dispensation.

A borough might agree — saying yes, the developer can build several storeys higher than the rule but it needs to include some green space in the plan, or some family housing units.

If developers indicated that they would build social, family or affordable housing and then reneged, they often had to pay a fine that went into the borough’s coffers.

Often, it was cheaper to pay the fine than to build the promised housing.

That is all supposed to change in the new plan.

Now, all new building projects larger than 4,843 square feet (about five units) will have a penalty fee built-in if they don’t make good on their plan for social housing.

Lussier says one of the major weaknesses of the bylaw is that developers still have the option of paying the penalty fee.

“For us, this is way not acceptable,” she said.  “We need to oblige developers to develop social housing units inside of the project as much as we can.

But Sauvé says the penalty fees are much higher now than they were before.

“A developer is not incentivized to pay out,” he said. “This is going to generate a lot more money for us to, in turn, buy land and then create new social housing opportunities.”

What happened to affordable housing?

The first version of the mixed metropolis bylaw included a provision saying 20 per cent of new builds needed to qualify as affordable.

During consultation, the city heard that the requirement was too demanding for developers. It also heard that there was a lack of control over who benefited from the affordable units.

In the final version of the bylaw, only certain areas in the city require affordable housing: Nuns’ Island and in Saint-Laurent, around the REM stations, as well as one location in Outremont.

Sauvé says the city soon plans to add more zones where affordable housing will be mandatory.

Elsewhere in Montreal, any developer building projects larger than 48,437 square feet (roughly 50 units) needs to pay into a fund used to create affordable housing by the city.

“We are seeing it now in Montreal, the market value is way out there, and the increase of rents have exploded in the last year,” she said.

In the new version of the bylaw, the definition of affordable housing also changed. To qualify, units must be rented or sold for 10 per cent less than the average cost of the neighbourhood.

The goal is to protect the affordability of the unit in the long-term, says Sauvé.

“We were considered one of the most affordable metropolises in North America and we’re losing that quickly. So that’s why we have to fight really hard,” said Sauvé.

Will housing costs go up?

During consultations, groups representing developers expressed concerns that the cost of private housing will go up because developers are being forced to build social and family housing at their own expense.

An analysis by the city found that the cost of housing in Montreal could rise by as much as two per cent.

“There’s this impact we cannot shake. It is with us,” said Bernier.

“We don’t have any issue with the goal. The goal to provide social housing is a good goal. But when we’re stuck financing the problem, that’s where you have difficulty.”

“I understand their concerns,” he said. “But we’re asking them to contribute more.”