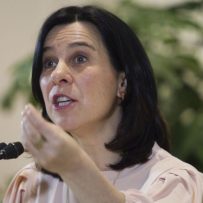 Owners of low-rise apartment buildings in Montreal will be eligible for subsidies of up to $14,000 per unit and $500,000 per building under new measures announced Monday.

“In a context of the housing shortage, it is vital to act on every front to increase access to quality units for all Montrealers,” she said at a press conference at city hall.

The subsidies will be available starting April 1 for buildings of five storeys or less with at least six units. At least one-third of the units must have affordable rents, meaning they must be at least five per cent cheaper than the median rent for comparable units in that borough.

The city will invest $3.7 million per year in the program, which it expects to result in the renovation of 70 buildings a year for a total of 700 units annually, she said.

At that rate, with some 500,000 rental dwellings in the city, of which the city estimates one-fifth are in substandard condition, it could take more than 140 years to address the problems with Montreal’s deteriorating housing stock.

However, Robert Beaudry, the executive committee member responsible for housing, said that combined with the city’s intention of stepping up inspections of unsanitary housing, the program would have a significant impact.

The previous program paid out only $800,000 a year and was not focused specifically on affordable rental housing, he said.

Beaudry said tenants in buildings that receive renovation subsidies will be provided with information on the amount awarded to their landlords. This will enable them to contest rent increases they consider to be excessive, he said.

The subsidies can be used to renovate parts of buildings that city inspectors have identified as needing repair, according to the city’s guidelines. They also cover improvements to make buildings more environmentally sustainable, for example, improving insulation or planting vegetation.

Other types of work covered include replacing an oil furnace, replacing lead water entries, getting rid of mould, exterminating vermin or bugs and correcting problems that endanger tenants’ health or safety.

When possible, tenants should be allowed to remain in their units while the renovations are being done, according to the guidelines. If that is not possible, the landlord should try to accommodate them in another unit in the same building or compensate them for moving and give them a chance to move back in afterward.

However, Maxime Roy-Allard, a spokesperson for the Regroupement des comités logement et associations de locataires du Québec (RCLALQ), warned the subsidies could result in excessive rent increases. He said the city should ensure that landlords respect guidelines for increases set by the Quebec Rental Board.

Hans Brouillette, director of public affairs for the Corporation des propriétaires immobiliers du Québec (CORPIQ), welcomed the initiative but said it was too limited to have much of an impact. He also complained that landlords were not consulted.