Monthly rent across Canada expected to rise — especially in these 3 cities: report 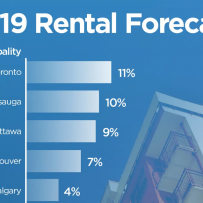 Low vacancy numbers, unaffordable housing and high interest rates may cause rental prices across Canada to increase in 2019, according to a new report.

On Thursday, Rentals.ca released its 2019 rental market predictions, saying that finding an apartment, house or townhouse to call home will continue to challenge renters this year, mainly in Canada’s larger cities.

The average rental rates could increase by six per cent year over year on a national basis in 2019, the report said. In Toronto, rental prices may surge 11 per cent, while climbing nine per cent in Ottawa and seven per cent in Vancouver.

A look across Canada

Although the report predicts rental pricing will go up, Vancouver realtor Steve Saretsky said he has seen prices stabilize over the last eight to 10 months.

“There’s no doubt there has been huge growth in rent prices over the last couple of years, but [anecdotally speaking], it seems to have stabilized in Vancouver,” he said, adding that he predicts the city will not see rental increases in 2019, as there is a lot more supply coming to the market.

Andrew Scott, a senior analyst with Canada Mortgage and Housing Corporation (CMHC) who specializes in the Toronto rental market, said there may be an increase next year, such as the prices of houses, high demand for rental units and low vacancy rates.

Difficulty getting into homeownership

Scott said there are three factors that are making it more difficult to transition into home ownership — meaning people stay in the rental market longer.

These include higher housing prices, interest rate hikes and the tightening of mortgage rules.

Last year, Ottawa changed the national mortgage rules for Canadians getting, renewing or refinancing a mortgage. Many now have to undergo a stress test, proving that they would be financially OK even if interest rates were to rise substantially above their actual mortgage rate.

The Bank of Canada also raised the interest rate three times last year, which currently sits at 1.75 per cent. More hikes are also on the way, but the bank said the timing of its next one will hinge on changes in global trade policies as well as how higher interest rates from past increases affect consumption and housing.

“Many young couples and families have decided to postpone purchasing a home, which has driven two-bedroom rental rates to nearly $2,600 a month in Toronto and over $2,000 a month in Ottawa,” he added.

The increase in rental demand has not been offset by new supply, according to the report.

For example, in Toronto, although the supply for rental units has been growing, Scott said the demand is so strong it has not outpaced the demand.

“But in the next few years, the number of rental homes that have been under construction will start going up,” he said, adding that this may help offset the demand.

As for the year ahead, Scott said he predicts vacancy rates to remain historically low but added that he does see it easing in the next couple of years.

“There are quite a bit of rental units still under construction, and the accelerated population growth may cool down, too, so the new few years may get better,” he said.

According to the CMHC, the increase in Canada’s immigration contributed to a growth in demand for renting in 2018.

“Net international migration recorded an increase of 23 per cent in the first half of 2018, compared to the same period in 2017,” a CMHC report stated.

And since a majority of newcomers tend to rent when they arrive in Canada, this increased the demand on the rental market, the report stated.

The slight growth in employment among young people aged 15 to 29 in the last 12 months may also have boosted rental housing demand.

“Rents are also a function of income,” Scott said. “The economy is doing well in Toronto and the unemployment rate is low, meaning there is more income growth and renters have been able to afford the increases.”