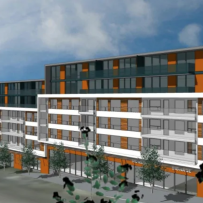 Vancouver council has approved a pair of six-storey buildings in East Vancouver that will add 178 units of rental housing.

Council voted unanimously for the new developments around Renfrew and East Broadway. Both are mixed-use buildings with commercial space at street level.

They mark the first projects under the Moderate Income Rental Housing Pilot Program, which council approved in November 2017 to create more affordable housing.

The pilot allows for up to 20 buildings where at least 20 per cent of the residential units must be set aside for “moderate income households,” defined as households earning between $30,000 and $80,000 per year.

In exchange, the city will loosen height and density restrictions on the buildings, waive development cost levies and reduce parking requirements, among other incentives for developers.

Council did not vote on a third contentious development on 2nd Avenue and Larch Street in Vancouver’s Kitsilano neighbourhood, also part of the housing pilot.

Some residents say they’re worried the five-storey, 63-unit residential building would be too tall.

Sixty-five speakers had signed up to address council Thursday evening. Council voted to recess and will resume discussion of the proposal on Tuesday.