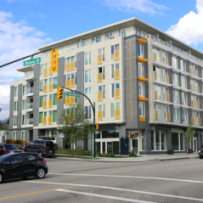 Oakridge Centre is best known as one of the most profitable shopping malls in Canada, but the makeover of the Vancouver retail hub will turn it into one of the biggest residential enclaves in the city.

QuadReal and Westbank are partners on the redevelopment project, which, once completed, will feature 10 towers of varying heights up to 44 storeys, as well as mid-rise buildings.

Two of the tallest buildings in Burnaby, both 187 metres high and with 600 homes between them, are part of 11 residential towers being built on the site.

The Amazing Brentwood will bring more than 6,000 homes to the community. There will be new shops, restaurants, office space and a one-acre civic plaza to host events and celebrations.

The aging Coquitlam Centre mall is being measured for a mixed-use development by Morguard Investments that proposes 11 residential towers bracketing a renewed shopping centre.

With bricks-and-mortar retail struggling to gain traction in an online-consumer environment, it makes sense for shopping centres to mix in other real estate sectors, said Corrado Russo, senior managing director of investments and global head of securities at Timbercreek, which has $7.5 billion in assets under management.

Russo pointed to RioCan Real Estate Investment Trust as an example. Canada’s largest REIT is turning transit-oriented retail assets it owns into mixed-use projects with a substantial mix of residential. In Calgary, RioCan has joined with residential developers in a $70-million mixed-use retail and residential redevelopment at Brentwood Village Shopping Centre, which is served by light-rail transit. In Metro Vancouver, though, it is not only retail projects that are hedging their bets by mixing in other revenue streams.

Even the booming Metro Vancouver office market, which is experiencing its largest-ever development cycle, includes projects in which mixed uses from retail to housing are included, according to the latest office report from Avison Young.

Examples include Boffo Developments’ The Smithe, at 225 Smithe St., which will deliver 31,000 square feet of new office space over three floors in the podium of a 27-storey condo tower. The Lonsdale in North Vancouver by Hollyburn has a rental residential tower that tucks 13,890 square feet of office and retail space into the first three floors.

Millennium Central Lonsdale, which will be built on the site of the former Northmount medical buildings, will feature a 26-storey residential tower and a five-storey mixed-use building with 34,000 square feet of office space on the second and third floors, along with ground-floor retail space, when it opens in 2023.

The Offices at Lonsdale Square has 70,000 square feet of strata medical offices and retail, but also a seniors’ activity centre.

In what could become a trend, industrial, retail and residential are mixing in new projects in Vancouver, led by the Strathcona Village on East Hastings by Wall Financial.

Story by: Business in Vancouver