Millennials Study: Down Payments Delay Homeownership by up to 35 Years 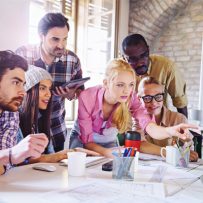 In a nationwide survey of over 9,000 prospective homebuyers carried out on its platform, Point2 Homes found that 66% of the Millennials interested in purchasing a home would like to do so within one year. However, almost half (49%) of the survey-takers aged between 25 and 38 years old have savings significantly under the national average down payment amount, which is $25,000. Moreover, some of the Millennials in the survey state that they haven’t managed to set aside anything at all, meaning that the desire to buy a home might be in conflict with Gen Y’s budgetary realities.

Most Millennials Set Aside Less Than 10% of their Monthly Income

35% of Millennials state that they set aside less than 10% of their income each month and 30% of respondents only save between 10% and 20%; a small minority (5%) are very thrifty and manage to survive on a small budget, saving over half their income. 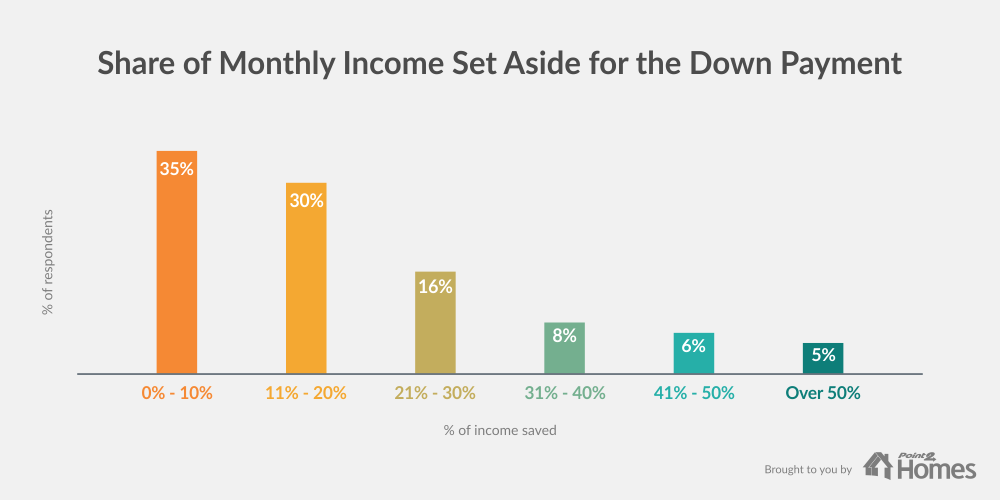 It might be that sometimes, the sacrifices Millennials could make in order to save faster are considered too big. Skipping vacations for a year, getting a second job, and lowering general expenses is not that easy when opportunities for consumption and entertainment abound. But even if they are thinking about starter homes and condos, certain financial restrictions are still necessary if they want to meet their goal.

And when it comes to actual amounts, the majority of young people who wish to eventually own a home do not yet meet the minimum requirements. 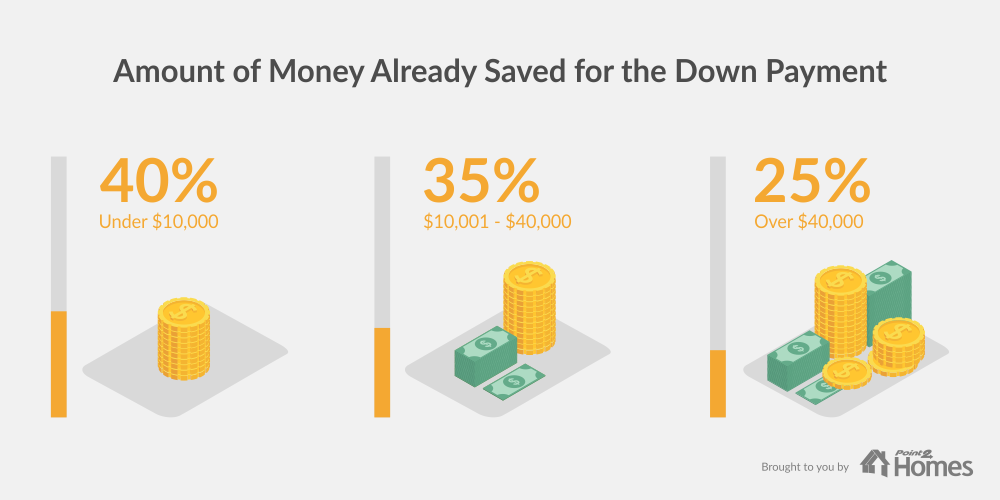 Given that the down payment is the first hurdle on the road to home ownership, saving enough money is the natural first step. However, 40% of Millennials had saved less than $10,000 at the time they took the survey, which is not even half the national average down payment amount.

And if we zoom in to city level, it becomes apparent that home ownership can go all the way from being an achievable goal to looking like a dream deferred indefinitely.

Saving for a Down Payment in Canada’s 10 Biggest Cities 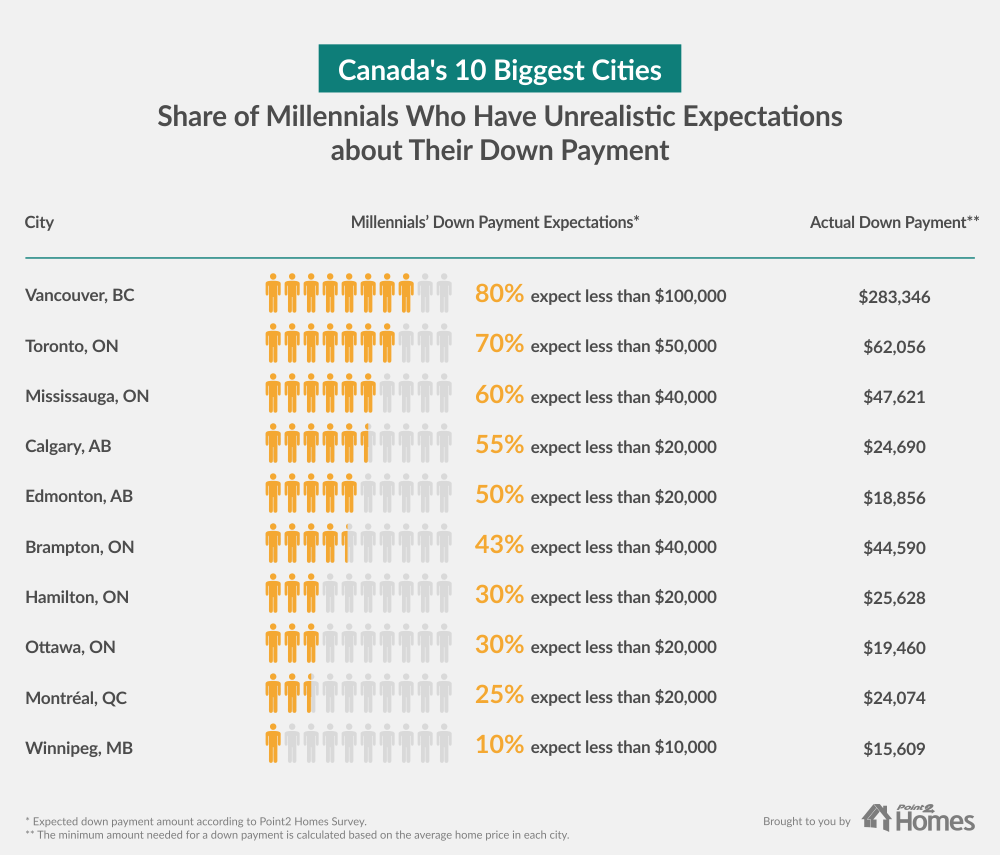 The contrast between how much money Millennials think they will need and the actual down payment amount is striking in several cities. In some of the most popular and most expensive business hubs in the nation, most Millennials are in for a big surprise.

In other urban hubs, there are smaller discrepancies between how much money Millennials think they need, the amount they actually need, and how much they have in savings. However, even in cities like Calgary, Edmonton or Mississauga, a significant percentage of young home seekers are expecting significantly lower down payments.

This means one of two possibilities might be true: either Millennials are counting on their parents for help when they take the step towards homeownership, or their unrealistic expectations will set them up for a rude awakening when reality hits.

To get an idea about how long it would take Millennials to gather the money needed to start the home buying process, the Point2 Homes analysts started from the premise that Gen Y-ers would set aside a fixed 20% of their income every month, per the well-known 50-30-20 financial rule. However, knowing that Canadians save, on average, only 4.4% of their income, we included estimates based on that percentage as well. The projections in Canada’s largest cities in each of the two scenarios are as follows: 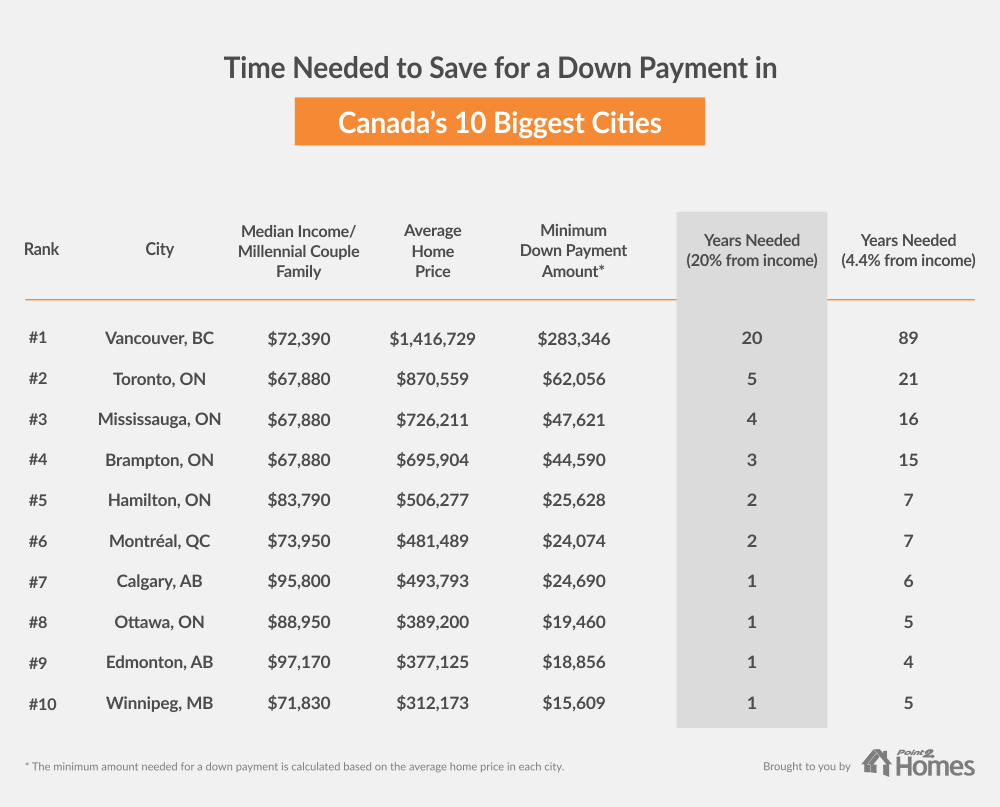 The down payment requirements in the nation’s biggest cities vary considerably. This means buying property in some of these real estate markets is somewhat attainable, while other markets are highly unattainable for Millennials. Vancouver, the eighth-most populous city in the country, is the harshest on its aspiring home owners: young people who want to settle down here are looking at almost 20 years’ worth of savings, assuming they can set aside 20% of their income after paying the rent and covering other necessities in this expensive Pacific metropolis.

The other big urban centres don’t come even close to this overwhelming time span. Toronto might also discourage a fair share of Millennials attempting to find their dream home in this city, but it is more than accessible by comparison: in Canada’s largest business centre, it would take four and a half years to save for a down payment. Mississauga and Brampton, ON, follow suit, with a more encouraging three-and-a-half years. Edmonton, AB (11 months), Winnipeg, MB (13 months) and Ottawa, ON (13 months), close this ranking with an even more positive outlook for prospective young homebuyers.

Seven Canadian Markets Are Completely Out of Reach for Millennials 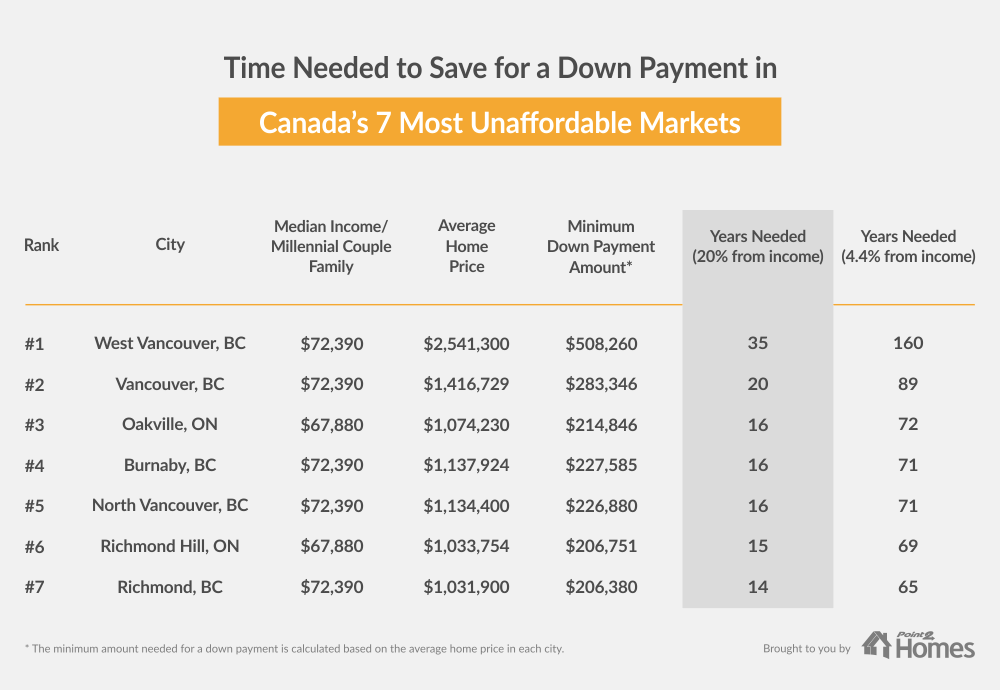 Many Millennials would like to one day own a home in the city they love. But if that city happens to be Vancouver, they probably already know their homeownership dream is more like a fairy tale: enjoyable to think and talk about but ultimately unrealistic. Vancouver, however, is not the only urban hub that is totally out of reach for people in their mid-twenties to mid-thirties: according to our analysis, there are seven markets where it is virtually impossible for a Millennial couple to save for a down payment.

Taking into consideration the average home prices and the average household income of Millennials living and working in Canada’s most expensive urban centres, it would take young people in these places a depressingly long time to save for a down payment. And even this would only be possible if Millennials religiously set aside 20% of their income each month.

Moreover, given the recently introduced mortgage stress test, along with other measures aimed at cooling the Canadian real estate market, Millennials might not meet the credit standards and debt-to-income requirements necessary to qualify for a mortgage, even if they do have the money for the down payment.

High home prices are the first part of the problem

West Vancouver, one of Canada’s wealthiest municipalities, boasts average home prices well over $2.5 million. This amount puts West Vancouver in a league of its own, since the down payment alone could actually buy you a home in 64 of Canada’s biggest urban centres.

The second most expensive market in Canada, Vancouver, saw its average home price settle at a little under $1.5 million in June. The other five real estate markets, three of them in BC (North Vancouver, Burnaby, and Richmond) and two in Ontario (Oakville and Richmond Hill) all have prices that hover around the $1 million mark.

But things could be worse. Considering that Canadians only manage to save, on average, 4.4% of their income per month, the numbers look simply comical (or tragic, depending on your perspective and sense of humour). Under these conditions, it would take people in Richmond, BC (the least expensive of the seven) 65 years to save for a down payment, and no less than 160 years if they chose to settle down in West Vancouver. These absurd numbers suggest that something has to give in the Greater Vancouver property markets.

Although a lower income is to be expected considering the age and professional experience of this demographic, people still want to become financially independent, move out of their parents’ house and buy their own when they’re in their 20s or early 30s. This feat seems to be the most challenging in Oakville and Richmond Hill, ON, where the average income per household is $67,880. This means two of the seven urban centres with the highest home prices are also among the top three places where Millennials have the lowest salaries in all of Canada (Cornwall, ON, is at the bottom of the list, with an average income of $65,250 for people aged between 25 and 38 years old).

In fact, many of the cities surrounding the Ontario capital, Toronto included, have a similar median income ($67,880), but it’s the diverse home prices that make the difference: while both Oakville and Richmond Hill have crossed the $1 million threshold, meaning a Millennial would need over 15 years to save for a down payment, in Mississauga it is possible to save for your entire down payment in three and a half years, provided of course 20% of your income is set aside.

40 Cities Give Real Cause for Hope