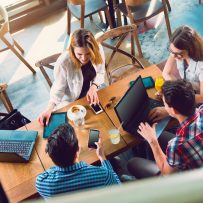 Reaching Gen Z may seem more akin to throwing darts at balloons on a spinning wheel. The generation lives on multiple devices, drifts back and forth from one to the other and checks in multiple times each day.

Maintaining pace with this ever-mobile generation now entering the housing space is creating quite a stir. Like the Millennials, who changed traditional marketing strategies in multifamily and student housing, Gen Z is playing by its own set of rules.

At September’s National Multifamily Housing Council student housing conference in New Orleans, housing operators and technology experts caught the attention of attendees who are tasked with reaching the future of campus living, a generation that knows no other way than being online. A packed house at the Marriott Galerie was all ears and not shy about asking questions afterward.

Generation Z, the group of 21-year-olds, and who under moderator Jack Biehunko of Greystar Student Living says can’t remember a time when internet technology was not always a click away, are already changing the way that housing executives are building, equipping and leasing units. Their rise and redefining of social media use means leaders should be prepared to embrace a third generation of renters differently than Millennials or Baby Boomers.

“This generation has grown with a huge number of devices at their disposal,” said Laura Shaikh, Director, Client Services at Wpromote. “In marketing, it’s all about the timing. So hitting this generation at the right time on the right device on the right platform is really going to be a challenge we see.”

More than a quarter of America’s population belongs to Gen Z, according to recent research by Sparks & Honey, a New York-based branding agency. Their screens of choice are phones, laptops, televisions, gaming devices and tablets. They spend 41 percent of their time outside of school with computers, and 68 percent are comfortable purchasing online as they are offline.

Their attention span is getting shorter, eight seconds compared to 12 for Millennials.

Making a first impression is essential, says Scott Wilson, an account executive at website designer Jonah Systems. He stressed the importance that all device platforms be consistent with one another, quick and function well.

“(Generation Z) is very mobile savvy,” he said. “You’re having over 75 percent of people seeing websites on mobile, and of those they won’t even go to the larger site. Your information has to be concise. The development has to work, has to be consistent, it has to be quick, has to be functional and always be reliable when communicating information.”

Wilson said the function and design integrity should carry all the way through. With such a short span to work with, forcing Gen Z to wait longer on a mobile photo or mobile video to load compared to screen function won’t cut it.

Generation Z is on as many social media networks as they are devices, and they’re checking them multiple times a day. While Facebook is a big player, trendy channels like Snapchat, which boasts 100 million users, and Instagram are capturing Gen Z’s attention. Snapchat is the communication channel, and Instagram is a place for visibility.

Facebook, unlike for Millennials and Boomers, is generally a place that Generation Z seeks information and easy access to other platforms, like Snapchat, which has 400 million in-shares every day, Shaikh said.

“There are other up and coming channels, particularly Snapchat, but with Facebook they are still connecting with their broader audience, their family, people they know, so that’s still a big part of what they’re doing,” she said. “There is a single sign-in, so Facebook is a way that they’re signing into other applications that are necessary to them. We don’t see Facebook going away. But Snapchat is huge.”

The generation prefers close networks rather than broadcasting their messages over an extended grid. Incriminating photographs and bawdy posts aren’t their style. They’re less likely to share pictures of a kegger than their older counterparts.

Because they are on so many networks, Shaikh said it’s important that housing operators have a strategic presence within social media. When Gen Z reaches out for inquiries, an immediate response is expected.

“They’re going to expect you to answer those channels, particularly if you open a conversation,” she said. “You have to make sure you’re monitoring them. That’s really key. If you’re not there and they open a conversation with you’ve basically left them hanging, and they’re needing that immediate response, it’s going to be a bad situation.”

The other challenge is forging relationships with a more isolated breed of renters. Gen Z is used to making purchases, signing leases and generally taking care of things online rather than in person. James Whitley, Vice President and Chief Operating Officer of Landmark Properties, Inc., says that’s putting a greater onus on property managers to make the most of a moment when they interact personally, especially when Gen Z wants something done.

“There are very high levels of expectation for this generation,” he said. “They want immediate customer service, they want it efficient and fast. There is a heightened level of that. We’re being more deliberate because touch points are fewer.”

Whitley said Landmark Properties, Inc., stresses stellar customer service and prompt attention when Gen Z calls. A maintenance tech who answers a service request may become the face of the property without knowing it, and every moment counts.

“It’s getting out and walking, spending extra time to really engage,” Whitley said. “We do more of a door-to-door renewal campaign. That creates the opportunity for face-to-face interaction.”

But don’t just limit the experience to a nice how-do-you-do.

“If I come to your door, I offer that help. You give me a piece of information to act on, you’d better act fast.”