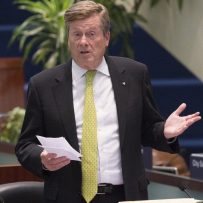 Toronto taxpayers may have to dig a little deeper. Average homeowner can expect to pay $43 more per year starting in 2020.

“By approving an increase in this levy … and extending it over the next five years, we can raise needed funds that will be dedicated to improving our existing transit system and building more affordable housing across our city,” Tory said Wednesday in his keynote address at the Canadian Club.

“Ensuring this is dedicated funding, unlike our general property tax revenue, will protect it through this term and beyond so that it is collected and spent for one purpose and one purpose only — building up and investing in our transit and housing infrastructure.”

The move is expected to raise $6.6 billion, he said.

Tory said that once he hits homeowners with his increase, they’ll pay an extra $43 per year.

Money set aside for the TTC would go towards its state-of-good-repair program — which the mayor said Wednesday morning is at $33 billion over the next 15 years, $24 billion just maintain the status quo.

Part of the province’s $30-billion transit plan unveiled earlier this year, Peat said, is the freeing-up of city money initially set aside for system expansion, allowing the TTC to spend that instead on upkeep of the network.

“That would help meet the city’s commitment to its new 10-year housing plan,” Peat said.

Hikes to the City Building Fund aside, the mayor still intends to enter the 2020 budget season aiming at keeping property tax increases tied to the rate of inflation, Peat said.