MANY CANADIANS WILL TURN TO DEBT WHEN GOVERNMENT BENEFITS RUN OUT, SURVEY SUGGESTS 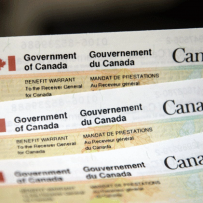 A large number of Canadians receiving emergency government assistance will turn to debt to meet their needs when those benefits run out, a new survey suggests.

The survey, which was commissioned by insolvency firm MNP Ltd. earlier this month, found that among respondents currently receiving benefits due to the coronavirus pandemic, 45 per cent will take on more debt in the event that financial support ends.

Forty-five per cent said they would reduce their expenses.

The survey comes just weeks before the Canada Emergency Response Benefit (CERB), which has paid out $76.4 billion since March, is set to end.

More than 8.7 million Canadians had applied for CERB to pay their bills and feed their families in wake of the biggest economic shock seen in decades.

After September, federal government plans to transition recipients to Employment Insurance (EI), and has also introduced new benefits programs to assist those who might be left out — including caregivers, those who are sick or must isolate due to COVID-19, along with Canadians who do not qualify for EI.

Those benefits, too, have an expiry date. The new programs are scheduled to be in place for the next year.

The survey did not ask how many of those currently receiving aid intended to apply for the new programs, but 28 per cent said they would apply for EI when their benefits ran out.

Experts have expressed concern about that transition, along with what could come next for those who are most vulnerable.

Recent food bank use is now comparable with previous years, she said.

“But folks have now gone through their CERB allotment. We have things like eviction notices back in force. People who were able to defer payments may now need to pay bills,” Beardsley said.

“People were able to keep their heads above water with the CERB. As that ends, we’re concerned there will be a moment where folks just can’t make it all work.”

Six months into the pandemic, the MNP survey found that 43 per cent of respondents said they, or someone in their household, were still experiencing some form of disruption or impact to their employment.

Among those, 15 per cent are working fewer hours or receiving reduced pay. Fourteen per cent said someone in their household has lost their job, and 13 per cent said they personally lost their position.

Perhaps surprisingly, so far in 2020 the number of Canadians filing for bankruptcy or looking to settle their debts through consumer proposals has fallen off dramatically.

Personal insolvencies were down 45.4 per cent in the second quarter of this year compared with the same period in 2019, government statistics show.

Bazian said aid programs have been a “saving grace” for many who might have otherwise become insolvent. And at the same time, collections agenies and the Canada Revenue Agency have taken a somewhat softer approach, he said.

Some people have also been able to curb their spending this year because there’s simply less to do, he noted. The nation’s household debt ratio has actually fallen slightly, according to Statistics Canada.

But all of that could change when things get back to normal — whenever that may be.

Bazian encouraged people to take a deep look at their finances, and get some help from a debt professional such as a licensed insolvency trustee if necessary.

The survey was conducted by Ipsos between September 1-3, 2020, on behalf of MNP LTD. For this survey, a sample of 2,001 Canadians aged 18 years and over was interviewed. The poll is accurate to within plus or minus 2.5 percentage points, 19 times out of 20, had all Canadian adults been polled.