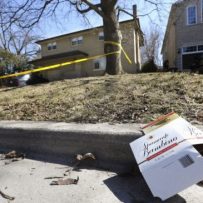 A justice of the peace has imposed a $10,000 fine on the owner of a Willowdale home who violated city bylaws by accepting short-term renters, often using web sites such as Airbnb to find them.

Justice of the Peace Gerry Altobello rejected a submission from the city prosecutor that the fine be set at $1,000 because that was “not enough” to send a message of deterrence to others doing the same thing.

Altobello said the defendant was “thumbing his nose at the community and the city,” by continuing to rent the home at 5 Glenelia Ave., for periods of less than seven days after being told to stop. The maximum penalty for a conviction is $50,000.

The home has been the site of problems.

Neighbors complained about the high turnover of occupants and loud parties. Last March during one party nearby residents heard four or five shots ring out inside the home, and saw partygoers fleeing. A young man who received a gunshot wound to his head survived, Toronto police say.

Last November, Yan Pan Zhao pleaded guilty on behalf of 2391324 Ontario Ltd., which owns the two-storey home at the corner of Bayview Ave.

Zhao told the Star on Wednesday that he was acting as “an agent,” for the homeowner. He acknowledged his wife, Dan Wei, is the sole officer and director of the numbered company.

Zhao said that after the city told them to stop the short-term rentals, “there were no new bookings. There was existing bookings but no more new bookings.”

The company has 90 days to pay the fine.

Prosecutor Geoffrey Uyeno told court the “defendant corporation” had lessened the penalty, by co-operating with the city, selling the house last November and agreeing not to rent it on a short-term basis until the March 31 closing.

But Altobello said $1,000 fine “would just be an expense of doing business,” and failed to take into account the soaring value of the property in today’s explosive housing market.

The guilty plea related to a zoning bylaw violation in October 2015 that came after inspectors interviewed a couple from Ottawa who were renting the house for four nights.

Altobello agreed to the prosecutor’s request to impose an order prohibiting the company from renting any property in this fashion in Toronto, unless the law changes.

He said it’s “essential that this doesn’t happen somewhere else” and disrupt and upset communities “and not making it a good atmosphere for people to live in.”

In court Wednesday was Glenelia Ave. resident Jan Morrissey, who said she was “absolutely thrilled” the justice of the peace imposed the harsher financial penalty in order to send a strong message.

“I hope people have to balance, ‘Gee I could rent my place out and get some money,’ with ‘I could also, perhaps be fined, big time.”

Morrissey also praised the bylaw enforcement officers for their persistence.

“I hope this now helps in turn to prod city politicians to get their act in gear and speed up on this and get the regulation that’s needed.”

It is the first conviction and sentence for the city’s municipal and licensing department, which is grappling with Toronto’s fast-growing short-term rental market. The licensing division will make recommendations on how to regulate the burgeoning industry in June. Under an old North York bylaw, which still applies while the review is underway, short-term home rentals must be seven days or more.