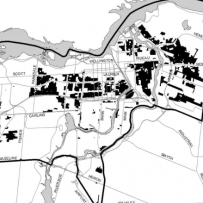 Older neighbourhoods in Ottawa could soon see more lowrise apartment buildings popping up between houses as the city updates its zoning rules in an attempt to encourage more rental units.

The changes to what are known as R4 zones are four years in the making, and stem from the city’s earlier issues with illegal rooming houses in neighbourhoods such as Sandy Hill and Old Ottawa South.

City staff closed a loophole allowing the rooming houses a few years ago, but also saw them as a symptom of a greater need: a shortage of affordable rental housing. As a result, the city decided to update its 50-year-old zoning rules to make it easier for developers to build walk-up apartments in established neighbourhoods.

Coun. Jan Harder, who chairs the city’s planning committee, called it a “really important policy piece” Thursday as committee members gave their unanimous approval, sending the matter on to city council for the final OK.

Most of Hintonburg, Vanier affected

The zoning changes would affect neighbourhoods from Westboro in the west to Blair in the east and south to the Rideau River.

Community associations have had these changes on their radar a long time, and most agree on the overall goals of creating more affordable housing, adding density to existing areas to cut down on traffic emissions, and having more people living in areas where they can walk to neighbourhood amenities.

But during Thursday’s virtual meeting, they also pressed city officials on such details as building facades, parking and green space requirements, and unit sizes.

“There’s nothing zoned lower than R4 in Hintonburg, so our entire area will be affected by the changes,” said Jay Baltz of the Hintonburg Community Association.

Historically, the area ended up with lowrise buildings that weren’t interesting to look at but cheap to build, Baltz said. That’s happening again, he said, as developers anticipate the city’s new direction.

“We’ve had a slew of rezoning applications for lowrise apartment buildings in Hintonburg,” said Baltz. “Almost universally, the first iteration was a plain box.”

Community groups also questioned whether the new units would truly be more affordable than the old buildings they’re replacing.

Others worried about ending up with an overabundance of bachelor and one-bedroom apartments, rather than units more suitable for families.

That lack of housing for the “missing middle” — options for families that are neither single-family homes nor condos in tall towers — is a key challenge in Ottawa, and in many North American cities.

Even though Thursday’s decision dealt only with core neighbourhoods, city staff are preparing maps for this fall that could “upzone” or increase the density allowed in areas all over the city.

That’s because Ottawa city council approved goals last spring to deal with a growing population by intensifying existing areas, in addition to expanding its urban boundary.