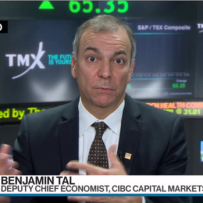 If the Canadian housing market had a spirit animal, a cat could be fitting.

Benjamin Tal, deputy chief economist of CIBC Capital Markets, says global and domestic developments that have led to lower interest rates have continually buoyed Canadian housing at times when it was poised to soften.

“The housing market has nine lives. Every time it’s supposed to slow down, something bad happens elsewhere that keeps interest rates low and the party’s still going,” Tal told BNN Bloomberg in a Friday interview.

An increasing number of economists are now forecasting the Bank of Canada to cut interest rates as the U.S.-China trade war takes a toll on the global economic outlook – a move that would provide yet another boost to the Canadian housing market and threaten to blunt the impact of government measures, such as the B-20 mortgage rules.

Tal adds that he believes the Bank of Canada prefers to avoid fuelling the housing market through lower rates, but trade pressures and monetary policy easing by central banks around the world might force its hand.

“That’s something the Bank of Canada would like to avoid. However you have to look at the economy as a whole and housing is only one part of it,” he said. “The consumer is not there, clearly investment is not there, exports are missing in action and the only thing that’s moving is actually the housing market again.”

Tal says the central bank will have to weigh the pros and cons of a rate reduction, but ultimately believes Bank of Canada Governor Stephen Poloz will follow suit with his fellow central bankers.

“Our forecast is that they will cut by 25 basis points and will call it a day.”