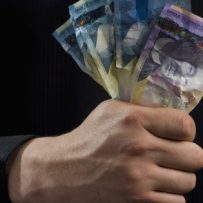 We haven’t seen economic growth like this since the heady days of the dot-com boom.

It might soon make sense to go cross-border shopping once again.

The Canadian dollar spiked by nearly a full cent on Friday after new data showed unexpectedly strong economic growth for the month of May.

The loonie touched a high of 80.55 cents U.S., its highest level in two years, after Statistics Canada reported the country’s economic output grew by 0.6 per cent in May, blowing away analysts’ expectations of around 0.2 per cent growth. It gave back a little of those gains later in the day, trading at around 80.4 cents as of mid-afternoon.

It’s the latest sign that Canada’s economy has recovered from the oil price collapse and is heading towards full capacity — something the Bank of Canada expects will happen by the end of this year.

In the past year, Canada’s economy has grown 4.6 per cent — the fastest year-on-year pace since late 2000, when the dot-com boom was winding down.

The news has made the markets more optimistic about Canada’s economy. Traders now see a 73.6 per cent chance of the Bank of Canada raising interest rates at its October meeting, up from 67.2 per cent before the StatsCan data was released, Reuters reports.

With the economy on a tear, the Bank of Canada is growing worried about the possibility of inflation making a return. The bank earlier this month raised its key lending rate for the first time in seven years, to 0.75 per cent from 0.5 per cent.

But that has some analysts and policymakers concerned. With Canadian household debt near record levels — the highest consumer debt burden among G7 countries — many fear Canadian borrowers could find themselves under pressure if interest rates continue rising.

According to a report at Bloomberg, officials in Canada’s federal Finance Department are concerned the BoC may have hiked rates too soon. They fear further hikes could cause consumers to reduce spending, harming the economy.

But Bank of Canada Governor Stephen Poloz is confident that this month’s interest rate hike was the right move.

“Our assessment is the economy can handle very well this move we made today,” he said after announcing the rate hike on July 12.

“You need to preface that with an acknowledgment that interest rates are still very low.”

Poloz said he has “no doubt” rates will move higher eventually, “but there is no predetermined path at this stage.”