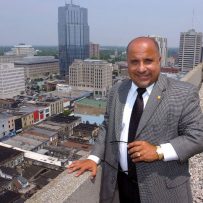 London landlord Shmuel Farhi has shed some of his core-area holdings in a $60-million deal.

“It was a good opportunity,” Farhi said. “They’re looking within three years to have a billion dollars in assets. We got cash for assets.”

Farhi also said he invested in True North in a move to broaden his business and give him more of a national focus.

“These are very strategic properties. We want to keep them the same for the long term,” Drimmer said.

“We like London. It’s a very stable market, and real estate likes stability.”

Farhi will manage the properties for True North, Drimmer said, adding the London developer invested more than $5.5 million of sale proceeds back into the real estate trust. “It’s a great marriage,” Drimmer said.

Farhi will use revenue from the deal to pay down debt, but the sale may signal a new willingness to part with properties he once considered untouchable: Downtown London sites.

“We’re open for anything and everything, and it is about time,” he said.

“They have good management, a solid team in place and concentrate on blue-chip assets across Canada,” Farhi said of True North.

The other Ontario properties sold to True North are in Sarnia, Hamilton, Peterborough and Kirkland Lake.