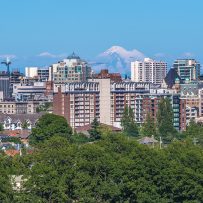 There is a changing of the guard amidst the churn in B.C.’s multi-family rental market which saw a record-shattering $3 billion in apartment building sales last year in Metro Vancouver and Greater Victoria.

Despite what appears the strongest rental market in Canada – with the highest average rents, the lowest vacancies and a consistent lack of supply – local landlords who have dominated the market for decades are selling, according to a new report from CBRE Vancouver, the leading multi-family broker in the province.

After a near year-long rent and eviction freeze and a capping of B.C. rent increases at 1.5 per cent for 2022, despite an official inflation rate at a 30-year high, many veteran owners are cashing out.

Vancouver has the highest average rent in Canada, with a one-bedroom apartment at $2,176 and the average monthly rent for a two-bedroom at $2,983, according to the December 2021 National Rental Report from Bullpen Research & Consulting.

Victoria’s average rent for a one-bedroom home is $1,566 and average monthly rent for a two-bedroom is $2,453, third highest in the country, the report found.

Last year, 185 apartment buildings sold in Metro Vancouver and Greater Victoria for a total of $3 billion, up from $1.2 billion in 2020. Major institutional investors and real estate investment trusts accounted for 60 per cent of the 185 transactions. These big buyers are often seeking scale with the purchase of existing portfolios, according to CBRE.

An example is the 15-property, 614-unit Legacy portfolio in Vancouver that CBRE sold for $292.5 million in February 2021. The seller was Hollyburn Properties of Vancouver, which had owned most of the buildings for decades. The buyers were InterRent REIT of Ottawa and Toronto-based Crestpoint REIT.

While some tenants mourn the passing of local landlords, well-financed institutional owners can offer advantages to tenants, according to Coulson, who noted that the deeper pockets allow regular maintenance and upgrades in a region where the typical apartment building is 54 years old. Larger landlords with multiple properties are also better equipped to ride out rental income and renovation restrictions under B.C.’s Residential Tenancy Act.

In 2021, only 6,269 new rental apartments were completed in Metro Vancouver, for example, despite an expected influx of 35,000 people moving into the region on average each year.

“The policy-based barriers restricting the development of new rental housing will continue putting demand on the rental market [and] continue to put downward pressure on vacancy rates and upward pressure on rents,” CBRE’s report concludes.