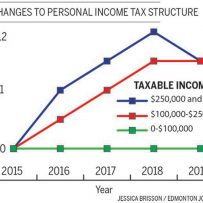 On December 7, 2015, the new Liberal government presented legislation in the House of Commons that will enact a number of tax changes based on their federal election platform. With their majority, they will be able to quickly pass this legislation and the changes will take effect on January 1, 2016.

As promised, the government has reduced the rate of tax on what was the middle tax bracket. The tax rate will be reduced from 22% to 20.5%. This will mean a savings of 1.5% on an individual’s income between $45,282 and $90,563. The government also introduced a new fourth tax bracket to fulfil its promise to increase the tax on the top 1% of income earners. Individuals will pay federal tax of 33% on income in excess of $200,000. In Ontario this will result in a top marginal tax rate of 53.53%.

With the introduction of the new top tax bracket, the government is making a number of consequential changes that will also impact individuals. They include:

Another election promise was the rollback of the Tax Free Savings Account (TSFA). For 2016 and subsequent years the TSFA limits will revert back to the original rules. This means that the 2016 contribution limit will be $5,500 and future year’s limits will be indexed to inflation and rounded to the nearest $500. The $10,000 limit for 2015 remains, so for those that did make use of the extra room there is no need to make a withdrawal. For those that did not make the additional contribution not all is lost as your carry-forward room will reflect this one year spike.

There were a number of corporate tax changes that are related to the new personal tax bracket. Changes include:

The government did not introduce changes to the Child Benefit or a repeal of the income splitting for families with children. They did announce that these changes will be introduced in their first budget. The Department of Finance release made clear that pension income splitting would not be repealed.

Should you have any questions with respect to these changes, please do not hesitate to contract a member of the Fuller Landau tax group.