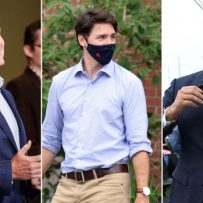 The race between the Liberals and the Conservatives is narrowing with upward movement in favour of the Conservatives as week one of the federal election campaign comes to a close, according to nightly tracking conducted by Nanos Research for CTV News and The Globe and Mail.

According to the latest nightly tracking ending Friday, which was released Saturday morning, support for the Conservative Party has increased by 3.9 per cent between Aug. 12 and Aug. 20, during the timeframe that saw leaders begin pitching their platform pledges to Canadians.

The 36-day campaign – the shortest possible election period under federal law – formally kicked off on Aug. 15 with voting day scheduled for Sept. 20. Liberal Leader Justin Trudeau was sitting at a “double digit advantage” days before the election was called, according to a previous Nanos survey, which said there was a “recoil effect” as speculation of a pandemic campaign mounted.

“It’s clear that it looks like Erin O’Toole and the Conservatives have had a good week compared to the week before when we did our tracking in the days just leading up to the election,” said Nanos.

This surge in the polls may be a result of Canadians getting to know the Conservative candidate, he added.

“Prior to the election, many Canadians did not have a formed opinion of Erin O’Toole, were unsure about the Conservatives, and it looks like from the polling that his rollout of his plan of action for the country, and also his first week has helped move the Conservative numbers up,” said Nanos.

Nanos said that the Green Party support may have dipped because they’re not focusing on a national campaign.

“Because they’re not running, I’ll say, a traditional national campaign, the leader does not have as much profile as the leader would usually get in a federal election.”

While Trudeau still remains the preferred prime minister among respondents, O’Toole has realized a noticeable gain, according to a separate Nanos survey that was released Saturday.

The nightly tracking data, ending Friday, suggests 32.2 per cent of respondents ranked Trudeau first, down from 35.6 per cent on Aug. 12, while 24.8 per cent ranked O’Toole first, up from 17.7 per cent.

NDP Leader Jagmeet Singh comes in at third with 17.7 per cent of respondents ranking him as their preferred choice.

The first week of the campaign saw leaders addressing the unfolding chaos in Afghanistan and Canada’s efforts to evacuate those who helped our military during the war there, the ongoing debate about whether some sectors should enforce mandatory vaccinations, and in keeping with the talking points of the 2019 general election campaign, where parties stand on abortion rights.

The Conservatives released their extensive party platform on Monday – a move that’s often expected later in the campaign – one that focuses on job recovery, pandemic preparedness, and affordability.

The NDP have also unveiled their policy pledges, although less detailed.

Both have not been costed by the Parliamentary Budget Officer, who will sift through each party’s platform and provide a numbered analysis.