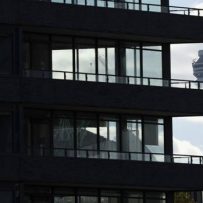 Canadian lenders are shifting their focus away from financing condo construction in favour of investing in rental apartments over concerns that the soaring cost of land and record-high levels of household debt are pushing more Canadians out of the housing market.

Roughly 60 per cent of lenders told a survey by commercial real estate brokerage CBRE Inc. that they planned to increase their budgets to finance rental-apartment transactions in the coming year, compared with just 30 per cent that said they planned to loan more toward condo construction projects. Another 13 per cent said they were concerned about the strength of the condo sector, with 7 per cent saying they were allocating less of their annual budgets to condo development in 2016.

Land values and municipal-development charges have skyrocketed in major markets such as Toronto and Vancouver in recent years. At the same time, the price growth for new condos has slowed to a crawl, squeezing profits for developers.

“With high-rise condos there is always the issue of valuations, what people are paying and the amount of debt that people are taking on for residential mortgages,” said Carmin Di Fiore, CBRE’s head of debt and structured finance.

By contrast, low vacancy rates have generated a steady demand for rental units, while Canada Mortgage and Housing Corporation insurance for rental-apartment construction has made rental financing a safe bet for lenders nervous about how the property market will respond to uncertainty over the fate of the Canadian economy heading into next year.

“Some of the major markets across the country have experienced a bit of a lull in condo construction,” said Darryl Bellwood, assistant vice-president of commercial financing at First National Financial LP, which primarily lends to condo and apartment developers. “So some of the developers, if they’re not getting traction on the sales of units, they’re moving toward the construction of purpose-built rentals.”

Many developers are registering their new apartment buildings as condominiums, giving them the option to sell the units as condos down the road if the market improves and earn rental income in the meantime, Mr. Bellwood said. He expects the trend of developers flocking to rental apartments to pick up over the next few years.

Institutional investors have also increased their appetite for rentals in the past year, with pension funds and REITs turning to rental construction in search of higher returns amid low interest rates. Canada Pension Plan Investment Board made its first foray into rental housing in the summer, when it paid $105-million for a 60-per-cent stake in a Toronto apartment building from Minto Group Inc.

Lenders also told CBRE they expect to continue to shy away from the Alberta market over concerns that the pain in the oil sector will continue into next year. Toronto and Vancouver will be the main beneficiaries of the shift away from Alberta, with more than 80 per cent of lenders saying they are focusing on boosting their business in those two markets next year.

Commercial real estate transactions in the Greater Toronto Area topped $3.6-billion in the third quarter, research firm Realnet Canada Inc. reported, up 15 per cent from the previous year and well above the decade average for the city. Demand came from developers snapping up residential land along with a “noticeable influx of foreign capital,” Realnet said.

In the Lower Mainland of B.C., commercial property sales hit a five-year high for the third quarter, according to the Real Estate Board of Greater Vancouver. There were nearly $2-billion in sales in the third quarter, up more than 33 per cent from the same period the previous year. The sales volume of land and industrial properties rose 50 per cent in the quarter compared with the same period last year. Sales of apartment buildings more than doubled.

In trying to grow their presence in Toronto and Vancouver, domestic lenders will most likely face competition from foreign investors looking to expand their presence in Canada, encouraged by the falling loonie and the country’s reputation as a safe haven. About half of lenders said they expected the greatest threat to their business in 2016 would be competition from an influx of foreign capital.

“Based on the numbers of business cards landing our desk from foreign lenders, there is a willingness to look at this market,” Mr. Di Fiore said, citing increased interest from lenders in the United States, Germany and across Asia. 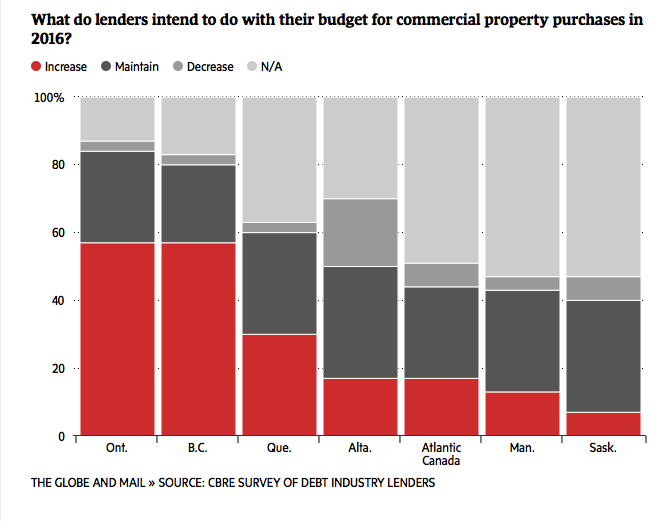