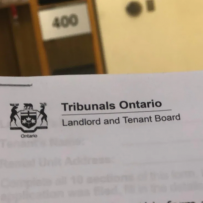 Ankit Patel says he inadvertently became a landlord when he bought his dream home.

Now, tenant problems and a major backlog at Ontario’s Landlord and Tenant Board (LTB) have put him in so much debt, he has to sell his mother’s home and has even considered selling the dream home.

The 38-year-old is among other landlords who came forward to share their stories about how LTB delays are creating stressful situations and financial hardships.

“This was our life savings,” says Patel. “I studied in the U.S., came from India. We worked so hard, day and night, to pull up all this money … our happiness has gone away, from getting a house we thought was our dream home to now, just ruined.

“I might’ve fallen into this frenzy of this property market going so high that I [thought I] would never afford a bigger house.”

‘I wish I wasn’t a landlord’

Patel immigrated from India in 2004, and worked to afford a home with his wife and two kids. In December, after selling a townhouse months prior, they eventually bought a $1.25-million home in Stoney Creek, along the shore of Lake Ontario.

The lakefront property has the backyard his daughters always wanted and five bedrooms — more than enough for them to stop sharing a room.

A short-term tenant was living at the home when Patel bought it, but he says they told him they would move out in early January.

Now, he said, the tenant owes more than $10,000 in unpaid rent and won’t return messages. The tenant’s partner is also still living in the home, he says. Patel and his family have been staying in his mother’s basement, paying off her mortgage as well as his own.

Documents show he filed an N4 for rent arrears and an N12 (an eviction so the owner or family members can move in) to end the tenancy. Patel says while he secured an LTB hearing in June for the unpaid rent, he hasn’t received one for the N12.

Patel says he expects it will be a year before the matter is all said and done. Realizing he couldn’t continue paying for his mother’s home and his own, Patel was going to sell the dream home, but says the tenancy issue complicated things.

Now, they will sell his mother’s home to try to stay afloat.

“I wish I wasn’t a landlord because I don’t want to be one,” Patel said.

Coulter Lewis didn’t become a landlord by accident. He decided to use a home he bought in Niagara as his first rental property.

He’s had the home since October 2019, and when his tenants first moved in, there were no issues.

But the rent payments stopped in December.

Lewis said he’s out some $15,000 from missed rent and damages. He said he filed an N4 and an N5, another form to end the tenancy. But unlike Patel, Lewis says, he hasn’t yet had a hearing appointment scheduled.

Lewis may be a landlord in Niagara, but he’s beholden to his own landlord in Toronto. And now the bills are piling up.

“As a tenant in Toronto, do I continue the cycle? Do I stop paying rent here? Obviously it would affect my credit and I’m not that kind of person … but what’s the situation for individuals like myself who, I’m essentially now paying two mortgages off.”

Katie Remington, a lawyer with the Hamilton Community Legal Clinic, says the LTB is roughly six months behind. She says the delays are “frustrating, exhausting and untenable” for both tenants and landlords.

“Our hands are tied.”

According to Remington, LTB hearings haven’t been able to cover many matters in a single session, adding to the backlog.

“We’ve been advocating to have longer blocks to have matters heard and have both parties present their full cases.”

She said that during pre-pandemic times, someone could file paperwork in-person within minutes, but now they do it digitally and it’s taking a week.

“I can’t imagine how long mail is taking.”

She also said that in Hamilton and other cities, online services are the only viable option for people trying to use the LTB, which has created inequities and more delays.

Tribunals Ontario spokesperson Michael McLean didn’t confirm the length of the backlog, but wrote in a statement that the province is making changes.

As of Monday, the LTB will implement a new scheduling strategy to prioritize mediation services, reduce delays and improve the quality of dispute resolution.

“The plan will allow for more matters to be heard and ensure that landlords and tenants with scheduled hearings to end a tenancy and evict a tenant are provided same-day access to mediation services with a dispute resolution officer (DRO) before moving forward to a hearing with an adjudicator,” said McLean.

The plan also includes multiple tenant case management hearings in one block with several DROs and holding full-day hearings for most cases involving an application to end a tenancy or evict a tenant. LTB is adding adjudicators too.

For people who can’t do things digitally, McLean said, Toronto has public-access terminals where people can request other formats. He also said more terminals will be added across the province later this spring.

“The LTB understands the impact that service delays have on personal lives and businesses and we take this issue seriously. The LTB continues to encourage landlords and tenants to work together to resolve their matters.”

Not many options for landlords, tenants

Remington said people should still file with the LTB but do so knowing they may not hear back for at least six months. The exception appears to be rent arrears, which she says the LTB has prioritized.

She also said anyone buying a home with a tenant in it would need an LTB hearing to get an eviction order, which means there’s no guarantee someone will have possession of the home by then.

But people waiting for a hearing don’t have many options.

“The recourses are to try and negotiate if you can, to use other methods other than the board,” said Remington.

“It’s challenging because if a lot of tenants could move or landlords could, they would do that … but that’s often not the case.”