LANDLORDS, RENTERS HAVE THEIR PLANS FROZEN BY PANDEMIC 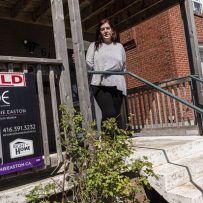 As restrictions on evictions during the novel coronavirus pandemic extend into their third month, some Ontario home buyers and sellers are discovering renters have incredible leverage over the fate of transactions, and some are willing to wield it.

When Tiina Walker attempted to close a deal to sell a triplex she bought in 2014, two of the three tenants left when she notified them of her intent to evict. But the third and final tenant has asked to be compensated $60,000 before he leaves.

“It’s extortion is what it is,” alleged Ms. Walker, who feels insulted by the offer, which would almost repay the tenant for the last five years of his rent. The sale was supposed to close May 1, but the tenant’s refusal to leave pushed her to negotiate an extension with the buyer. With the new deadline looming on June 1, she’s not sure what will happen next.

“I’m liable for not providing vacant possession,” Ms. Walker said. She can’t force her tenant to leave either, at least not now.

Ontario’s Residential Tenancies Act provides a form of no-fault eviction during a home sale transaction when the new buyer affirms an intent to take over the living space being used by a renter. The selling landlord then files an N12 application with the Landlord and Tenant Board (LTB) to evict.

Ms. Walker says she had a hearing scheduled for March 17 over a related non-payment of rent issue with her basement tenant, but on March 16 the LTB cancelled all in-person hearings and announced it would limit itself to teleconference hearings regarding any imminent threat of safety or in cases of crimes being committed. She filed an N12 application, but at that point it was too late. In addition, by order of Ontario’s Superior Court of Justice any pending eviction orders will not be enforced by the Ministry of the Attorney-General’s Sheriff’s office unless ordered otherwise by the court for the duration of the pandemic response.

“This was never a simple process: It took three months to get a hearing prior to COVID-19. How long is a real estate closing?” said Harry Fine, a paralegal and former LTB adjudicator who has negotiated on behalf of both landlords and tenants on N12 applications. Mr. Fine says that while the ability to delay a transaction closing was always present in tenant-landlord relations, with no evictions the tenants now have even more leverage. He points out that 10 years of rapid rent price inflation has also changed the playing field. “[Renters] realize a new place is its going to cost an extra $800 a month. Whether it’s cash for keys or making deals, negotiating is getting tougher,” he said.

“I’m dealing with a guy; all his life he worked in event planning and production, now there are no events. First time in his life he feels like he could be out in the street with his daughter,” Mr. Fine said. In April the tenant’s landlord sent an N12 notification as part of a home sale, requesting he leave by July. Mr. Fine attempted to get rent abatements for his client, but says the landlord refused and the talks escalated.

“I said if you forgive his rent for April, May, June, July and pay $20,000, he will make sure your real estate deal goes through. The landlord e-mails me back [saying] that’s extortion. No it’s not, there’s a process. It’s not my client’s fault the LTB shut down,” Mr. Fine said. “You don’t have to make the deal. If you won’t work with my client at all about rent, he has no choice and your real estate deal is not going to close in July.”

Yuliya Balina has experienced this process from the buyer’s side and her family was essentially homeless for a month in April as a consequence.

Ms. Balina and her husband bought a house in Toronto’s Swansea neighbourhood in September, 2019, and gave themselves a six-month closing time, which included a clause for vacant possession of the tenanted three-bedroom house. On March 23, a week before closing, the tenants refused to allow their inspector entry for the final visit and also asked for a two-week extension before moving out. While the couple had an escape clause, because the previous landlord had not fulfilled vacant possession, they had sold their other home and didn’t want to lose the new one. So, they took possession with the tenant’s status unresolved. With the tenant refusing to move, they moved in with her husband’s parents.

Ms. Balina hired a paralegal, and discovered the tenant had refused a $10,000 cash offer from the previous landlord. When her husband attempted to perform another inspection, she said the tenant refused entry again. “We called the police. What usually happens in such a situation is the police ask the tenant to go outside. But the police turned to my husband: ‘We cannot help you. With COVID, nobody gets into the house. Do not call us again.’ And they [got] in the car and left.”

In early May, the situation resolved with the tenant moving out on her own after her roommate also left. Ms. Balina now plans to move in June 1 after her husband, laid off because of the pandemic, completes some renovations. In the end, the ordeal cost the couple several thousand dollars extra in fees for storage and moving (twice).

While landlords and buyers may feel trapped by the system, at present N12 for transactions do not qualify for emergency hearing treatment. And according to a statement from Ontario’s Ministry of the Attorney-General the new status quo is not about to change soon.

“Tribunals Ontario is actively monitoring COVID-19 developments and will update its policies based on advice from the Ministry of Health, Chief Medical Officer of Health and public health officials to protect Ontarians,” read the statement. “During this very challenging time, we are encouraging landlords and tenants to work together, and to speak to one another to come to arrangements that will ensure all individuals and families have a place to stay at this time while putting their health and the health of all Ontarians first.”

Mr. Fine doesn’t see things changing even when the LTB begins hearings again, in part because he predicts there will be a massive wave of eviction applications from landlords over non-payment of rent that will explode the waiting list. If tenants choose to stand their ground, buyers and sellers may have to either kill deals or accept their terms.

“Tenants aren’t stupid. It’s the only business in the world I know of where the customer knows more about the business than the business operator,” Mr. Fine said.

Ms. Walker’s allegations have not been tested by a judicial process. “This case is going to be very interesting,” said Masoud Tchavoshi, who is negotiating on behalf of the tenant and declined to offer any more comment on the substance of the matter.