LANDLORDS AND TENANTS IN CANADA’S HOTTEST HOUSING MARKETS FINALLY AGREE ON SOMETHING: THE SYSTEM IS BROKEN ON BOTH SIDES 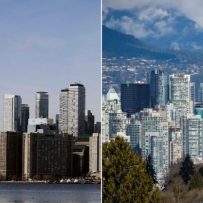 In Toronto and Vancouver, the two cities in Canada with the highest costs of living, renters have gotten a reprieve during the pandemic from most kinds of evictions and rent increases.

But as the moratorium on evictions was lifted in Ontario at the beginning of August, and will end on Sept. 1 in British Columbia, experts warn this will trigger thousands of eviction notices — and long-standing tensions between landlords and tenants may reach a tipping point.

In interviews with the Star, both landlords and tenants say they have felt unfairly judged and stereotyped throughout the COVID-19 pandemic.

However, both landlord and tenants have, in this rare moment, also found something they can agree on: The system is broken on both sides. In Ontario, more than 6,000 people face eviction for nonpayment of rent during the pandemic. In B.C., the provincial government said that 12 per cent of renters made partial payments to their rent during the state of emergency.

“I have a (six-figure) income and can’t complain,” said Jason Boyes, 35, who is an industrial mechanic living in Vancouver. “But now that I’m my household’s main income earner … if we are feeling the pinch, how is urban living even possible for lower-income people?

“Something needs to change. This current system isn’t working. Developers promise to build affordable units, but then the building is done and they jack up the rent to often double what they promised, and the government lets them get away with it,” he added.

His rent for a two-bedroom condo in Metro Vancouver is $2,295 a month plus utilities. Boyes, who has an investment property located in rural interior B.C. which he rents out, moved to Vancouver in 2014 in search of better-paid work.

While he is a tenant, he is also a landlord and sees both sides of the situation. He is fed up with the lengthy bureaucratic processes that lead to landlords being saddled with huge bills for too long.

“When my tenant refused to leave for three months, I had to take a second job to cover the costs of maintaining the house and the mortgage,” Boyes said.

“I’m lucky my tenants this year have been able to make their rents, because I don’t know how we would cope if they didn’t. We just had a baby and my wife isn’t working, and we have to pay high rent each month, too.”

Sarah Lindsay, who is in the middle of packing up her home to comply with an eviction notice she received right before Christmas 2019, agrees that many small-scale landlords have their own financial stressors and try to be fair to their tenants.

Since 2003, she has lived in a small heritage house in Mount Pleasant in Vancouver, and her landlords had not raised her rent once. She only paid $950 a month, until a developer purchased properties in the area and evicted residents to make way for a multi-storey development.

The temporary ban on evictions during the pandemic gave Lindsay more time to shut down her antiques business in the city, and compete with other Vancouverites to find an affordable rental far away from the city centre. But now as COVID-19 cases continue to climb in B.C., Lindsay is shocked that the province would allow evictions.

“At one place I saw, there were about a hundred people mostly from Vancouver putting in bids with many not wearing masks … In (another) place, a landlord told me the pandemic was a farce and wouldn’t give me any social distance,” she said.

“I worry that someone who’s sick won’t get tested, and will keep looking for a place and infect people because of the urgency and stress of needing a home while the pandemic is still ongoing.”

The pandemic has caused undue stress on low-wage earners, and ripples of the economic downturn have reached even those who normally could afford housing with ease. All of the people that the Star spoke with said astronomically high housing costs in some Canadian cities amounts to a human rights crisis — potentially forcing people into precarious living situations during a pandemic.

Before COVID-19 hit, B.C. resident Rick Long said he had never missed a rental payment in his life.

He feels discouraged that whenever the plight of tenants come up in public conversations, people like him get judged for not having enough savings.

“We don’t know if we’ll have a home in a few months,” said Long. The 53-year-old recently invested most of his savings to launch a social media marketing company.

“I don’t think people realize that people who are self-employed don’t have a lot of savings because all the savings goes into our businesses. And this is Vancouver. How many people are making enough each month to save?”

While Long worked day and night to grow his business, his wife’s income as a dental hygienist covered most of their living expenses, but dental offices were among the first businesses to close in March. Even as some have reopened, clinics are taking far fewer patients because of the need to thoroughly sanitize between appointments.

The rent for their small townhouse in Surrey, B.C. is $2,150 a month and this spring, the couple were only able to pay half of that. When Long emailed his landlord to ask if they were going to get evicted after Sept. 1 if they cannot pay the rent in full, he received no reply. Now, they don’t know whether to start packing their bags.

Research by rental website PadMapper found a decrease in the cost of one-bedroom units by 8.3 per cent in Toronto and by 5.9 per cent in Vancouver in July. According to a report by Urbanation, the vacancy rate for rental units rose to 1.8 per cent in the GTA in the second quarter of 2020 and the availability rate — which includes units where renters have provided notice that they’ll vacate — rose to 3.2 per cent.

But while rent has decreased, price points remain high: PadMapper found that rents for one-bedroom units average $2,100 in Toronto, and $2,070 in Vancouver.

Jeffrey Canton, who is currently renting in Toronto’s downtown Annex neighbourhood, says that the cost of a one-bedroom apartment still far exceeds what he’s able to pay. “I moved into the space that I’m living in just four years ago,” Canton said. “Since then, rent (costs) have more than doubled.”

The 61-year-old was issued an N12 eviction notice for his landlord’s personal use of the unit shortly before the pandemic hit. Due to the 60-day notice period overlapping with the eviction moratorium, Canton remains in his basement suite, but is actively searching for new housing. The struggle to find adequate housing at a decent price has left Canton feeling “unprotected,” and that the system is broken, he said.

“I have been unable to find almost anything comparable that I can even afford,” Canton said. He acknowledged that it can be “problematic … for landlords not to receive rent from their tenants during the pandemic,” but disagreed with the idea that those seeking affordable housing should leave the city to find it.

“Why should I have to leave the city in order to find affordable housing? I mean, I’ve lived in Toronto my entire life.”

In an email to the Star, a spokesperson for the Ontario Ministry of Municipal Affairs and Housing said Bill 184, which has been criticized as paving the way for fast-tracked evictions, means that adjudicators “must consider whether a landlord attempted to negotiate a repayment agreement with their tenant.” The bill “reinforces to landlords the necessity of exploring repayment agreements and maintaining tenancies — rather than resorting to evictions,” the statement continued.

A spokesperson for the B.C. Ministry of Municipal Affairs and Housing said in an email that the vast majority of renters have been able to pay rent during the pandemic, and advised renters still experiencing financial difficulty as a result of COVID-19 to explore other programs from BC Housing including the Rental Assistance Program (RAP) and Shelter Aid for Elderly Renters (SAFER).

In response to criticism from landlords that dispute processes take too long, the spokesperson said the average time for the Residential Tenancy Branch to process monetary disputes is 16 weeks. The RTB has created an online option to help cut wait times.

Murray Martin, a representative for BC ACORN (Association of Community Organizations for Reform Now), told the Star the organization is pushing for rent forgiveness for tenants that can’t meet their obligations before the B.C. eviction moratorium lifts on Sept. 1.

“If someone during this time is still owing rent — it’s probably that they can’t afford to pay rent,” Martin said, adding that up to 15 per cent of B.C. renters either couldn’t meet their rent obligations or couldn’t pay in full. “So it’s not like that’s going to stop in September and all the prices are magically going to be going down.”

In Toronto, ACORN rep Peter D’Gama argued for a repeal of Bill 184, which tenant advocacy groups warn could make it easier to evict tenants without a hearing if they don’t agree to rent repayment plans. ACORN is calling for “no COVID evictions and also for rent forgiveness during this time of the pandemic,” D’Gama said.

A rent freeze would allow renters to get back on their feet, he said, adding that “if things worsened due to a second wave, (renters would) still have some security … then there’s no pressure to choose between food and the rent and other necessities.”

But Boyes said rent forgiveness would only overburden landlords, who are often erroneously stereotyped as being extraordinarily wealthy. “There are a lot of renters on Facebook groups talking like they’re owed housing by somebody, and don’t need to pay,” Boyes said. “I can understand people’s struggles with housing, since I have to deal with it myself, but it’s not fair to landlords to have that sense of entitlement..”

Anthony Wu is a first-time landlord in Toronto. He says he worked hard to purchase an apartment to rent out for a modest income while his immigrant family lives with relatives in Toronto. Now he also feels burned by Canada’s rental system.

“Our tenants stopped paying rent in January, when it had nothing to do with COVID-19. We were sympathetic at first, but it seemed like they were making up one excuse after another, and when I tried to speak with them in person, they refused to open the door for me,” Wu said.

Wu filed a complaint to Ontario’s Landlord and Tenant Board in February, and has not received any information about a hearing date. He is shouldering all the costs of the apartment’s mortgage and other costs, and sees no end in sight.

“I think it’s so sad that I’m not able to support and give extra income to my family,” said Wu, who splits his time between Hong Kong and Toronto.

“In Hong Kong, this rarely happens where a tenant would stay in an apartment without paying rent. People would prefer to move out if they can’t afford a place rather than be seen as taking advantage of a landlord.”