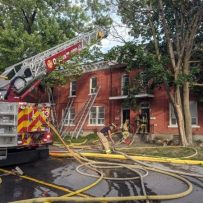 A local real estate management firm wants the City of Ottawa to buy its Besserer Street rental property, which it says has been rendered unusable by a nearby safe consumption site for drugs.
The four-unit property, at the corner of Besserer Street and Nelson Street, has been without tenants for five months, said Veronica Ackland, property manager for Gorfay Realty.

Ackland said she cannot rent the properties under the Residential Tenancies Act, which requires landlords to provide safe housing. That’s impossible, she said, when the property’s lawn is regularly used by people who inject drugs, and frequently littered with discarded needles.

“The City of Ottawa needs housing? I’ve got housing,” Ackland said. “They can buy it and run it. We’re open to discussions. Come at us with a number.

“We’ve renovated the units but we can’t rent them because I can’t keep the needles off the front lawn, and can’t keep people from breaking in.”

Late last month, a fire broke out in one of the empty units following a break-in.

Ackland contends the problems at the Besserer Street property are due to the supervised consumption site operated across the street by the Sandy Hill Community Health Centre.

Opened in 2018 in response to the deadly opioid epidemic, it’s one of four supervised drug consumption sites in the city. The sites are designed to offer a safe, public place for people to inject, snort or swallow drugs.

People who use drugs alone or in isolated places are more likely to die from overdoses since much of the current drug supply is tainted by fentanyl, a powerful synthetic opioid that can be fatal even in small doses.

The Sandy Hill Community Health Centre’s Nelson Street site offers supervision for up to five drug users at a time.

But Ackland said the site is unable to handle all of the foot traffic it generates, and many use the lawn of the Besserer Street property to inject. “They’re not allowed to inject on the centre’s property so they wander 10 more feet onto our lawn and start injecting,” she said, adding: “This hasn’t gotten better in the last two years: It’s substantially worse.”

The company installed security cameras, she said, but they were stolen. Bars on the windows have been broken. The city has suggested the landlord fence in the property, but Ackland said existing bylaws limit the height of a front yard fence to one metre. (Exemptions to the fence bylaw are permitted for “the health or safety of the public.”)

Rideau-Vanier Coun. Mathieu Fleury has met with Ackland to discuss the issue. He said the city can help the landlord rent the units through its rent supplement program directed at families in need, but the owner first needs to put up fencing, lighting and security cameras to make the property safe.

“I want those units rented — they could be good family units — but they need to do a bit on the outside to make sure  those spaces are family friendly. Because right now they aren’t, they’re not safe,” Fleury said.

While there’s “no question the severity of the opioid crisis and the proximity of the supervised injection site are harmful to that property,” Fleury said, those kinds of problems exist in neighbourhoods throughout the city.

Those problems — public drug use, petty crime and behavioural issues — will continue to challenge residents, he argued, until the city addresses the larger issues of homelessness, tainted drugs and mental health resources.

Ackland said installing a wrought iron fence around the property would cost about $135,000. Instead, she wants the community health centre to address the problems she said are caused by patrons of its supervised consumption site.

Rob Boyd, director of the health centre’s Oasis harm reduction program, disputed the causality of the problems experienced by the Besserer Street landlord.

“I think there are some really big, underlying social issues: the toxic drug supply, the homelessness crisis, the impact of COVID-19,” he said, noting the problems experienced on Besserer Street are happening in many other areas of the city.

Boyd said there’s not enough capacity across the city’s supervised consumption sites to manage the frequency with which fentanyl drug users inject themselves. Heroin or hydromorphone users typically inject three or four a times a day, he said, but fentanyl users tend to inject nine to 13 times a day because the half-life of fentanyl is so much shorter.

Each of those injections is potentially lethal.

“So there’s more injecting happening and a greater desire to use the (supervised consumption) site so it has been quite overwhelmed at times,” he said.

The only way to manage the level of demand, Boyd said, is to move more users to the safe supply program, which provides them with pharmaceutical-grade narcotics.

In 2020, 218 people died from accidental overdoses in Ottawa, up 75 per cent from the previous year, according to Ottawa Public Health.