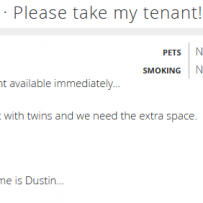 At a time when budgets are tight and housing is at a premium in B.C., a Victoria landlord is taking an unusual step: advertising his tenant.

“Please take my tenant!!!” the ad on Used Victoria proclaims. “I have a great tenant available immediately.”

The advertisement was posted December 8th by landlord Jacob Corr, who says he is trying to help his tenant Dustin find a new home.

Corr’s wife is pregnant with twins and he says their growing family will need the suite that Dustin currently occupies.

But the landlord didn’t want to leave a good tenant high and dry.

“The reason I put the ad out is because it’s not Dustin’s fault that he has to find a new place to stay,” Corr said in an interview with Victoria Buzz.

“It’s through no fault of his own, so we just figured we’d help him out.”

He says that Dustin has been a clean, respectful tenant who has always paid his rent on time. The two were introduced to each other by a mutual acquaintance who also recommended Dustin as a tenant.

Corr initially rented out a spare bedroom to Dustin for six months, before the suite became available. Dustin rented the suite for two years.

Then, the news of the pregnancy arrived.

“At first we were kind of in a panic, we were going to try to get a bigger house,” Corr said.

“We decided the smart, less stressful thing to do would be to take back our suite.”

Housing and finances have been common issues during the COVID-19 pandemic. But Corr says regardless of the difficult circumstances in the province, he would have helped Dustin anyway.

He added that he’s already received inquires, and around 10 or 12 of them are offers he is hopeful will work out. Corr is planning to respond to them later today.

The landlord and his tenant have arranged a 3-month notice to find a new home for Dustin.

As for the act of kindness, Corr is quick to downplay his role, suggesting that small gestures can go a long way.

“It’s not hard, it only took me a few minutes,” Corr said.

“A lot of these things, people don’t have to do, but it’s always better when you do. Better for everyone.”