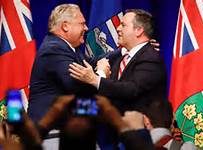 Alberta Premier Jason Kenney visited Ontario on his fourth day on the job to meet with Premier Doug Ford and discuss their mutual opposition to the federal carbon tax.

Both premiers are strongly against the levy, and Kenney thanked Ford for being a key player in a coalition of provinces fighting the carbon tax.

“Premier, as you know, my party even in Opposition has been in court supporting you, fighting for Ontario taxpayers, because ultimately you’ve got to fight for Canadian taxpayers coast to coast,” Kenney said at Ontario’s legislature Friday.

Saskatchewan’s Court of Appeal ruled in a split decision Friday afternoon that the tax is constitutional.

Ford later said it was not the end of the road, noting Ontario’s Appeal Court still has to rule on his government’s challenge.

“It was a close one: 3-2, but this series isn’t over yet,” Ford said after meeting with officials in Bracebridge, Ont., about flooding there. “That’s Game One. We still have other games to play.”

Saskatchewan Premier Scott Moe has indicated he wants to appeal to the Supreme Court of Canada, but Ford said even if the courts deny the challenges, there are other ways to fight it.

“If we can’t beat them in the courts, we’re going to beat them at the ballot box in October because every single province that has run on the anti-carbon tax has won: New Brunswick, P.E.I., Ontario, Manitoba, Saskatchewan, Alberta,” Ford said. “I think the message is pretty clear.”

Incoming P.E.I. Premier Dennis King has said he doesn’t fully support the carbon tax, but he’s not going to join other Conservative premiers in fighting it.

Ford’s government, meanwhile, is also ordering gas stations across the province to display a sticker showing the federal carbon tax adding 4.4 cents per litre to the price of gas now, and rising to 11 cents a litre in 2022. Service station owners that don’t display the stickers could face fines of up to $10,000 per day.

Ottawa has committed — and has now written into law — that 90 per cent of the revenues collected from the fuel charge will be returned to individual households in the provinces where the revenues were raised.

A recent report from the parliamentary budget office said that over the next five years all but the wealthiest 20 per cent of Canadian households will get more back from the rebate than they will pay in carbon tax.

In Ontario, the carbon tax will cost the average household $256 this year, and the average rebate will be $300, the report said.

Ontario has also released a radio ad with a narrator saying the tax will see people pay more to heat their home, drive their kids to school and buy food, with the sound of clinking coins between each item listed.

At the start of Friday’s meeting, Ford congratulated Kenney and said he couldn’t wipe the smile off of his face.

“What a great ally,” he said. “I tell you, the people of Alberta — they’re so fortunate to have such a great person leading the province.”

Kenney said he appreciates Ford’s “open for business” message — a mantra used by both premiers — and that he will be telling the financial sector in Toronto that Alberta is open for business too.

Kenney also thanked the Ontario premier for his support for pipelines.