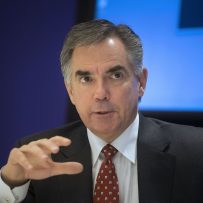 Jim Prentice, a former premier of Alberta and federal cabinet minister in Canada, has died in a plane crash. He was 60.

The Cessna Citation crashed shortly after takeoff near Kelowna, British Columbia, on its way to Calgary on Thursday evening, killing all four people on board. Officers and a police dog reached the scene in a densely wooded area shortly after midnight, “but unfortunately they were not able to locate any survivors,” Dan Moskaluk, a corporal in the Royal Canadian Mounted Police, said in a statement.

Prentice served as Alberta premier from 2014 to 2015, when his Progressive Conservatives were defeated in an election. He was federal lawmaker with the Conservative Party in Ottawa from 2004 until 2010, holding several ministerial portfolios including environment and industry.

While in office, Prentice championed the development of the Alberta oil sands and the building of pipeline projects, along with strengthened environmental standards.

Condolences rolled in from across Canada and from political parties of all stripes.

Also among the dead was another member of Prentice’s family, Ken Gellatly, according to a family statement released by the Alberta government.

“To lose two family members at once is unbelievably painful,” the statement said. “In the time Jim has been with us, he was a friend to many. Jim was a loving and compassionate man who dedicated his life to his family and public service. He will be so greatly missed.”

After leaving federal politics, Prentice served as vice-chairman and senior executive vice-president of the Canadian Imperial Bank of Commerce.

“This news comes as a terrible shock to all of us,” Victor Dodig, president and CEO of CIBC, said in a written statement released by the bank. “Jim was a great friend, colleague and Canadian. Our thoughts and prayers are with Jim’s wife, Karen, and their children and extended family.”

Prentice also worked with Enbridge Inc. and local indigenous leaders toward an agreement on the proposed Northern Gateway pipeline. He joined Warburg Pincus LLC as an adviser earlier this year.

Canada’s Transportation Safety Board deployed a team of investigators to the crash site. The cause of the crash is so far unknown.