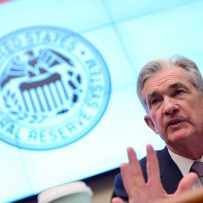 There will be no chance of a summer break for investors or policy makers in coming days as they brace for what might be the busiest week for the world economy this year.

The highlight is Wednesday’s decision by the Federal Reserve with markets and economists virtually united in predicting Chairman Jerome Powell and colleagues will cut interest rates for the first time in more than a decade.

Some Fed watchers predict officials will cut their benchmark by half a percentage point, but the signal is that they will eschew a bigger move in favor of a quarter point reduction. They will likely also leave open the possibility of further action down the road as they seek to sustain the record-long U.S. expansion and kick start inflation.

“While the Fed cutting rates by a quarter point will hardly be a surprise to financial market participants — as it has been well advertised and is priced in with a relatively high probability — the broader question will be how the Fed telegraphs its intentions regarding additional easing,” said Carl Riccadonna, chief U.S. economist at Bloomberg Economics. “Policy makers are keen to avoid getting ‘bullied’ by the markets into more than 50 to 75 basis points of rate reductions.”

The Fed isn’t the only event with the ability to shape the outlook for the global economy this year.

On Monday, U.S. Trade Representative Robert Lighthizer and Treasury Secretary Steven Mnuchin are set to travel to China for for the first high-level, face-to-face trade negotiations between the world’s two biggest economies since talks broke down in May.

Then on Friday, the monthly payrolls report will shed light on whether the Fed’s move was necessary. Economists surveyed by Bloomberg predict a 166,000 gain in non-farm jobs in July, slower than the 224,000 of June.

If that’s not enough, Bank of Japan policy makers meet on Tuesday amid calls to reinforce their commitment to low rates and Brazil’s central bank may cut rates on Wednesday. Thursday sees the release of global manufacturing data amid concerns many industries are already suffering recession.

Here’s our weekly rundown of other key economic events:

As Fed officials begin their discussions on Tuesday they will have some more data with which to assess the economy. Personal income, pending home sales and consumer confidence statistics are all due that morning. Then on Thursday, the ISM manufacturing report is expected to show industry is stabilizing and continuing to expand. Friday’s trade data will be pored over for evidence that the skirmish with China is having an effect. Also next week, the Treasury will say on Wednesday how much money it needs to borrow amid rising budget deficits.

It’s a big week for data after European Central Bank President Mario Draghi last week paved the way to cut interest rates in September and perhaps relaunch bond-buying. Tuesday is set to witness another decline in euro-area confidence while the following day is likely to confirm that the economy slowed in the second quarter to half the pace of the 0.4 per cent of the prior three months. Inflation data the same day is expected to show consumer price growth languishing well below the ECB’s target of just below two per cent. Thursday sees the release of purchasing managers indexes.

In the U.K., the Bank of England publishes its latest forecasts on Thursday with Bloomberg Economics reckoning it will turn more dovish as the Oct. 31 Brexit deadline nears. The Czech central bank is predicted to leave its benchmark unchanged at two per cent on Thursday.

Turkey’s new Central Bank Governor Murat Uysal will face public questioning for the first time on Wednesday when he presents the quarterly inflation report. After a 450-basis-point interest-rate cut at his first meeting, the largest in recent Turkish history, investors will be curious as to whether he shares President Recep Tayyip Erdogan’s unconventional belief that high interest rates cause inflation. Banks across the Persian Gulf region will probably move to ease if the Fed cuts as expected.

Bank of Japan policy makers finish a meeting on July 30. About a a third of economists in a survey published last week said they expect policy makers to strengthen their pledge to maintain rock-bottom interest rates rather than do nothing and risk a sharp appreciation of the yen should the Fed cut rates. Still, some officials see little to be gained from such a tweak, according to people familiar with the matter. Data released on Tuesday is forecast to show industrial production shrank again in June amid weak external demand.

In China, Bloomberg Economics says purchasing managers’ indexes will probably remain in contractionary territory as pressure on exporters persist. Elsewhere, a report on Thursday is set to show South Korean exports slid for an eighth straight month which will unnerve those already worried about global trade. Inflation data for Australia, Indonesia, South Korea and Thailand will help inform central bankers.

Brazil’s central bank is widely expected to cut borrowing costs on Wednesday with economists and traders debating how deep it will go. The following day, July industry output data may shed light on whether Latin America’s largest economy slipped into technical recession in the first half of the year. Mexico will learn if it was able to avoid a technical recession on Wednesday, when the national statistics bureau releases preliminary output data for the second quarter.