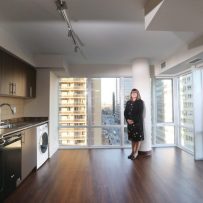 There are other business complications in developing rentals that would loosen the vacancy squeeze.

If developers were allowed to add 10 floors to every building proposal this year, there would be thousands of new rental units on the market in a short time, says Joseph Feldman, director of development for Camrost Felcorp.

“Ten storeys — that takes an extra 10 weeks on the construction cycle. A new 10-storey building takes a couple of years,” he said. “By just allowing a couple more floors, the impact to the typical pedestrian is negligible at grade. It’s low-impact but it will lead to a healthier market.”

The suggestion would be anathema to planners and politicians, worried about shade, scale and high-rise averse neighbours.

But lifting height restrictions is one way developers say cities could encourage the building of new rentals in the vacancy-squeezed Toronto region.

Canada’s housing agency reported on Tuesday that the area’s vacancy rate has hit a 16-year low of about 1 per cent as a growing population and high housing prices stress the region’s aging rental stock.

Just as developers have shown renewed interest in building rentals, the province has expanded rent controls to newer buildings, prompting some builders to switch their projects to condos.

Developers and landlords say they want to be part of the rental solution, but there are risks in projecting an appropriate return on their investments: what if interest rates and costs rise beyond the rate of the rent cap; what about the higher costs of maintaining buildings as they age; where are the incentives that are available through the market on luxury buildings and through the government for low-income geared units.

“Building a rental is different from building a condo in that you don’t get your money out right away. As part of that you need certainty around it,” said Jim Murphy, head of the Federation of Rental-housing Providers of Ontario (FRPO), an association of builders and property managers. 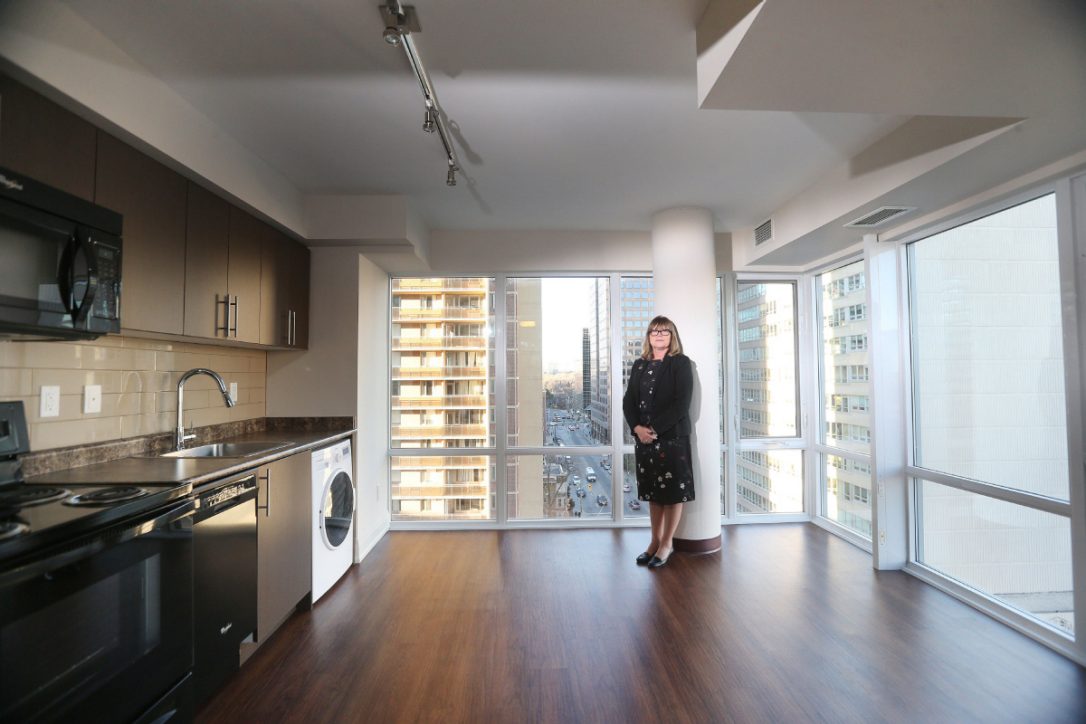 Park Property Management’s Margaret Herd in a new apartment building at 66 Isabella St. Hardly anyone moves, but when they do costs $10,000 to $15,000 to turn an old apartment into a unit that competes with private condo rentals, she says. (STEVE RUSSELL / TORONTO STAR)

But FRPO didn’t get the short-term exemption it had been seeking from rent control for new buildings.

“Ontario is the only jurisdiction that doesn’t treat new purpose-built rentals differently (than other developments),” said Murphy, noting that Quebec has a five-year (rent control) exemption.

“The guideline in Ontario is whatever the Consumer Price Index is. It’s capped at 2.5 per cent for an annual increase. This year, it’s 1.5 per cent. Next year it will be 1.8 per cent,” he said. “But in B.C., they add 2 per cent on top of that, so it’s about a 4 per cent return you would have had — or increase tenants would have had — in Vancouver this year.”

That 2 per cent is recognition of the cost of building in a city like Vancouver.

Ontario says landlords can raise rents beyond the guidelines if they can be justified by expenses such as significant capital repairs. They can also increase rents when a unit turns over.

“Since 2012, overall rents in pre-1991 buildings have increased between 2.5 per cent and 3.5 per cent annually, consistent with the approximately 3 per cent return that landlords and economists have advised is necessary to provide a return on investment in this sector,” said Myriam Denis, Milczyn’s spokesperson.

“Rental housing continues to offer investors, including REITs and pension funds, a more stable and higher rate of return than many other investments,” said Denis.

Feldman says Camrost is fine with its Day 1 dollar assumptions on a new luxury building it is opening at 101 St. Clair Ave. W., in the New Year. But it might have been different had the company known the government would expand rent controls to newer apartments as part of its Fair Housing Plan in April.

“The provincial regulations have very much impacted a lot of assumptions that made it easier to justify doing purpose-built rental,” he said.

“We certainly would think twice about re-launching or re-starting this project, but we’re committed to moving forward with it and it’s exciting to be delivering a very unique product to the market,” said Feldman.

Rent controls played a direct role in RioCan’s decision to switch to condo instead of rental on its King and Portland Sts. development, said CEO Edward Sonshine.

But he downplayed the significance of that change, calling the building a residential development test case for the Real Estate Investment Trust (REIT) company that has historically built shopping malls. 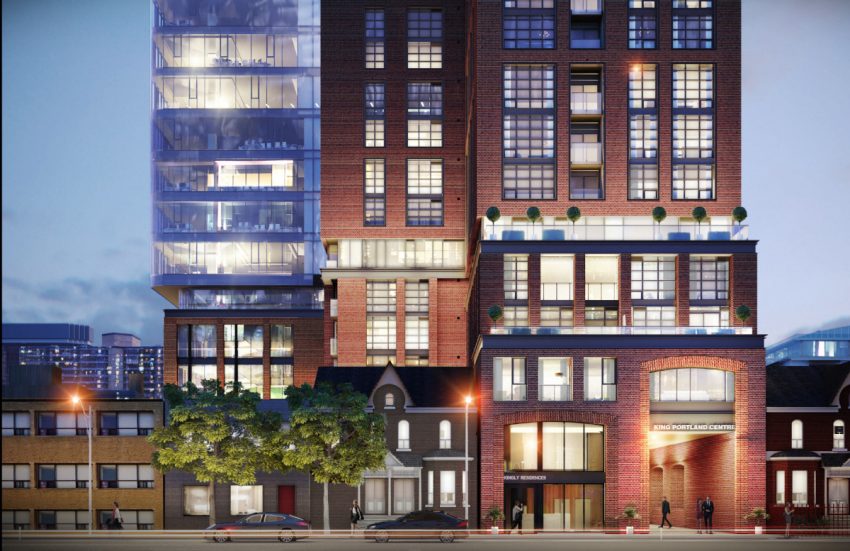 Rent controls played a direct role in RioCan’s decision to switch to condo instead of rental on its King and Portland Sts. development.

The 133 apartments are a small number in the context of the REIT’s plans to build 4,000 rentals in Canada over the next five years. About 2,000 apartments are already under construction, including 800 each in Toronto, the first of which — 465 units near Yonge St. and Eglinton Ave. — will be finished in about a year.

“There has been a huge shift in retail and right now 90 per cent of our revenue is from retailers. A lot of the space is not getting the growth we want it to,” said Sonshine.

At the same time RioCan owns valuable land near some of the Toronto area’s new transit lines. Its Colossus shopping centre, for instance, at highways 407 and 400, is 60 acres sitting next to the new TTC subway extension set to open in Dec. 17.

“We’re going to take a discreet portion of that land (about 10 acres) and, over a period of years, get rid of the tenants there and probably build a couple of apartment buildings — rental,” he said.

Being a REIT puts RioCan in a different category than traditional residential developers, said Sonshine.

“The only people staying in building rental are the institutional investors, the pension funds and people like us for the simple reason that we’re all about long-term cash flow,” he said.

It doesn’t cost much more to build a high-end apartment — maybe $30,000 or $40,000 more. The big costs are land and construction. The steel, concrete, plumbing, electrical and elevators are the same. The only real difference is finishes and appliances.

“In a rental building, the landlord is paying the property taxes, he’s paying the insurance, he’s paying repair costs. What happens if you start getting 5 per cent inflation? Your expenses are going up at 5 per cent a year, but your rent (increase) is capped at 2.5 per cent. A few years of that, your profits are gone,” said Sonshine.

”The fact is, governments don’t do anything to encourage you to build affordable. We’re in the profit-making business. You can make more profits by renting at $2,000 a month than you can at $1,600 a month when it’s not that different what you’re building.”

The main competition for purpose-built rental tenants are small investor condo owners, who account for more than a third of Toronto’s rental accommodation.

FRPO estimates the industry has spent $5.2 billion since 2012 repairing and renovating the province’s rental stock, most of which is decades old.

Tenants want condo-quality trimmings, said Margaret Herd, senior vice-president of Park Property Management. It manages 4,000 units in the city, including a new in-fill building near Yonge and Wellesley Sts. that opened last spring and rent for between $1,700 for a one-bedroom apartment and $2,800 for a three-bedroom

“We understood the demographic of the area and did not build luxury purposely, because we knew this fit the profile of the neighbourhood,” said Herd.

Older buildings require more than painting and cleaning when tenants move out. Landlords have to offer newer kitchen cabinets, bathroom fittings and laminate or hardwood flooring instead of carpet, said Herd.

“The buildings are 50 years old. Not only do you have that, you’ve got balconies, garages, roofs, windows,” she said.

At the same time, turnover has dropped as renters delay the home purchases or they simply can’t find places they want to live.

“Downtown, I don’t think we’ve had a vacancy for six or seven months,” she said. 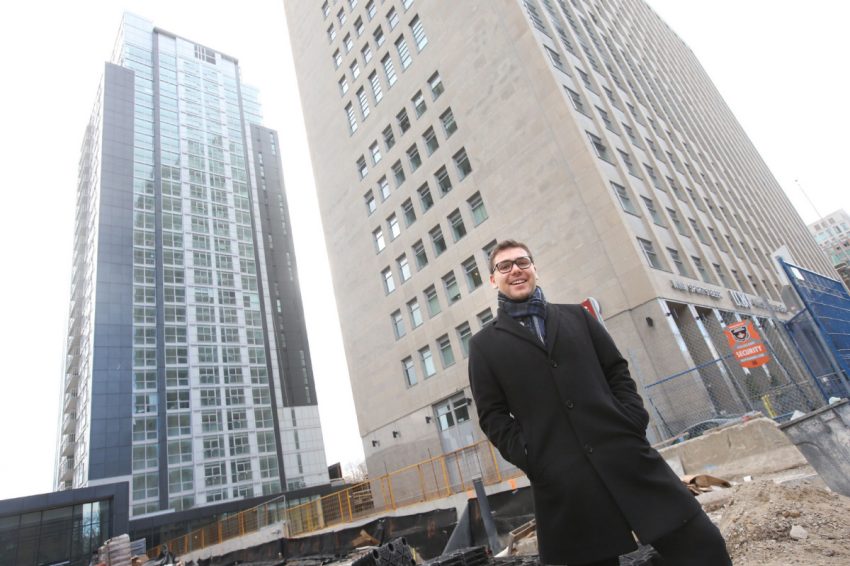 Camrost Felcorp’s Joseph Feldman at his company’s St. Clair Ave. W. buildings. “We certainly would think twice about re-launching or re-starting this project, but we’re committed to moving forward with it,” says Feldman. (VINCE TALOTTA)

“A lot of constraints on the condo side just evaporate,” he said.

The apartments won’t be ready for occupancy until the new year, but Feldman said the 26-storey rental tower is already attracting interest from young professionals who want to move into the neighbourhood between Avenue Rd. and Yonge St. and downsizers from nearby Forest Hill and Rosedale.

The main competition for purpose-built apartments are condos bought by investors as income properties. Adding rentals to the community means tenants can stay as long as they like and they have the benefit of professional property management.

It also means they can see their new home rather than having to visualize it off a floor-plan.

Rentals add to the mix of housing options in Camrost’s master-planned community that includes condos at the adjacent former Imperial Oil headquarters at 111 St. Clair and plans for another condo at 129 St. Clair, along with retail access and its own community centre.

“When selling condos you need to be conscientious of deal flow,” said Feldman.

Condo market dynamics make it tough to build bigger suites. But in the rental tower most floors include three one-bedroom apartments, five two-bedrooms and one one-bedroom plus den. Sizes range from 585 sq. ft. to 1,900 sq. ft.

Layouts are different too.

“Rather than square-foot focused, it’s more functional. We have larger living rooms and were able to do things differently when it came to the way in which the amenities work, the way the security system for the building worked,” he said.

A lot of requests to date have been for longer rental terms, said Feldman.

Renting, he said, “allows them to travel, to spend time in Florida or go to Europe and still have a home base in Toronto.”