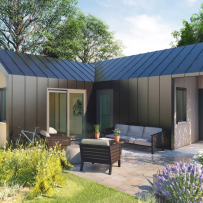 In the four months since the Halifax Regional Municipality changed its bylaws to allow backyard and secondary suites, a total of 32 new permits have been issued.

Council approved the bylaw change last September, but the amendment didn’t come into effect until November.

The change allows property owners to create secondary suites — a separate unit within a building, such as a basement or attic apartment — or backyard suites, a unit in a freestanding building on the property, such as a tiny home or an apartment above a garage.

Before the bylaw amendment, some areas of the municipality allowed secondary or backyard suites to be constructed through rezoning or development agreements, but others did not. The change makes the rules consistent across the municipality.

Of the new permits, 28 were for secondary suites and just four were for backyard suites.

Fourteen of the permits for secondary suites were issued in peninsular Halifax, while three were in Dartmouth, three were in Lower Sackville, two were in Middle Sackville, and one each was issued in Cole Harbour, Eastern Passage, East Petpeswick, Montague Gold Mines, Timberlea and Wellington.

By comparison, between January 2016 and October 2019, 117 permits were issued for secondary suites across the municipality.

Coun. Waye Mason, who represents Halifax’s downtown, said he anticipates the number of permit applications to continue to grow in the coming months.

“We never necessarily thought it was going to be thousands of units at once, but also, like, we adopted it in November and it’s winter and it’s COVID,” he said. “Construction season really starts in April, May, June.… I’m not panicking about the numbers.”

Mason said he has been fielding a lot of calls from homeowners interested in finding out more about the process.

For two Halifax entrepreneurs, the change in regulations sparked a business dream.

Oliver Nemeskeri and Sean Kirkwood are hoping to get in on the ground floor of the backyard suite building boom with Sprout Dwellings.

“There’s a general lack of housing supply in Halifax, let alone good quality, affordable options for people,” said Nemeskeri. “This can help offset some of those challenges that we have in Halifax with a very hot real estate market, but also a very hot rental market as well.”

The units Nemeskeri and Kirkwood want to build are accessible, about 450 square feet and cost approximately $100,000.

They could be used for long-term rentals, for homeowners to house aging parents, as a space for adolescents to gain independence while still living near home, or as extra space for families to work or play in — or for a variety of these uses over the lifespan of the building.

The duo conducted a survey that found 60 per cent of the 170 or so respondents would consider renting to long-term tenants, and most people were interested in having a unit to house parents.

The Sprout Dwellings units would not be custom-built, but rather a uniform design that could be easily replicated and built within weeks rather than months so they can get more units on the ground.

The business partners have not yet applied for a permit, but plan to start marketing within a month or so and have their first few builds under their belts by the end of the year.

How will these suites affect the housing crisis?

Mason says allowing the secondary and backyard suites could help create new space in the markets for home-ownership and rental markets.

“It’s a tool in the toolbox that’ll help on a bunch of different levels. But it’s not, you know, by itself, it’s not going to solve the housing crisis.”

The suites likely won’t directly help people looking for housing at the lowest end of the price spectrum, says Stella Lord of the Community Society to End Poverty.

“Unless there’s a constant supply of backyard suites at lower rents, it’s not going to affect the market very much,” Lord said.

She pointed out that creating a backyard suite or a new apartment is a sizable expense for a property owner.

“For anybody on income assistance … the most they can afford is about $500 or $600, $700 at the most. So is somebody going to make that investment in a home so that they can rent to a low-income person who can’t afford [market] rent?”

Some housing advocates worry that the increase in secondary and backyard rentals won’t alleviate housing pressure for residents, but rather will simply increase the number of Airbnb-style rentals.

Last fall, Halifax council approved changes to planning rules that would only allow short-term rentals in residential neighbourhoods if the properties are owner-occupied.

Mason said he expects the details of the proposed bylaws to come back to council this spring.