In scathing pre-election report, Ontario auditor general says deficit is $11.7B, not $6.7B 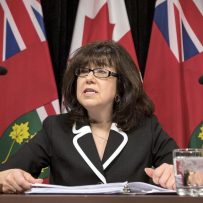 Ontario’s fiscal watchdog is warning that the province’s deficit projections are billions of dollars more than disclosed in last month’s budget.

“When expenses are understated, the perception is created that government has more money available than it actually does,” Lysyk wrote Wednesday in a scathing 27-page pre-election report to the Legislature.

“Government decision-makers might, therefore, allocate money to initiatives and programs that is actually needed to pay for expenses the government has failed to record properly,” she continued.

“More money will need to be borrowed to pay for the unrecorded expenses even when the government reports an annual surplus or a balanced budget.”

Speaking to reporters, Lysyk said the government’s accounting methods are “lawful,” but “it’s not right.”

The accounting disagreement stems from whether around $11 billion in the government co-sponsored Ontario Public Service Employees’ Union Pension Plan and the Ontario Teachers’ Pension Plan can be counted toward the bottom line.

While Lysyk and her predecessors had booked the pension holdings as an asset starting in 2002, she changed her mind two years ago.

“I had my staff review that asset much more than in past years,” the auditor told the Star at the time. She concluded that they should not be considered assets, because the government doesn’t have ready access to the funds.

Lysyk was also troubled by the accounting used in the Liberals’ Fair Hydro Plan scheme that uses borrowed money to reduce electricity rates by 25 per cent.

That cost is kept off the province’s books because the cut is bankrolled through the new government-owned OPG Trust, which borrows money at higher interest rates than the government would.

Her report is a political gift to Progressive Conservative Leader Doug Ford and NDP Leader Andrea Horwath as Ontarians head to the polls in six weeks.

“This is a trust issue,” said Fedeli.

But he could not say if the Tories would use Lysyk’s methods or the government’s when Ford releases an election platform in the coming days.

In the People’s Guarantee platform of former PC leader Patrick Brown unveiled last November, the party employed the Liberals’ accounting on both the pension assets and the Fair Hydro Plan.

“Let’s be clear, a lot has changed and so anybody that wants to go down the rabbit hole of a past platform can do that,” said Tory MPP Lisa MacLeod (Nepean-Carleton).

NDP MPP John Vanthof (Timiskaming-Cochrane), whose party is promising to scrap the Fair Hydro Plan, could not say a New Democrat administration would exclude the pension assets.

“I can assure that when Andrea Horwath is premier … we’re going to sit down with the auditor general and with the financial accountability officer and work together to ensure that Ontario’s books are open and transparent,” said Vanthof.

Wynne said Wednesday there is an “ongoing discussion” with the auditor general over the accounting “disagreement.”

“I know one of the discussions is over the Fair Hydro Plan. We made a decision that we needed to reduce electricity bills by 25 per cent. We have done that,” said the premier.

“We’ve kept that debt within the electricity system. That is the responsible step that we have taken,” she said.

Lysyk has had a fractious relationship with the governing Liberals in recent years, railing against them for diminishing her authority when it comes to overseeing government advertising.