In Edmonton Centre, affordable housing can be hard to find 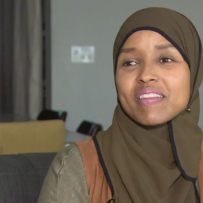 Nearly 20 percent of renters spend half —or more —of their income on rent.

Maryam Ali lives in Edmonton’s North Glenora neighbourhood with her three kids and her young nephew.

Housing prices would put the mature, central community out of reach for the single mother if she had to pay market rent.

But 2½ years ago, she moved into an affordable housing development built by a non-profit group on land owned by a church. Ali now pays rent that she can afford.

“For us, it means more than words can describe,” Ali said about her modern townhouse that looks over a park. “I’m really lucky that my children have been exposed to a very clean neighbourhood, and welcoming neighbourhood as well.”

Ali isn’t the only Edmonton-Centre resident who has struggled with finding an appropriate place to live.

Affordable housing is hard to come by in Edmonton Centre, a riding won by Liberal Randy Boissonnault in the 2015 federal election.

According to a community profile from the Canadian Rental Housing Index, 31,230 households in Edmonton Centre rent their residences, compared to 22,155 who own their homes.

Of the renters, 40 percent spend more than the recommended 30 percent of their income on rent. The Alberta average is 36 percent.

In Edmonton Centre, 19 percent of renters spend half or more of their income on rent.

Katherine Swampy, running for the NDP, said people don’t just need housing they can afford. They need housing that meets the needs of their families.

“Some people are living in houses where there are not enough bedrooms and they have a large and growing family,” Swampy said. “And in order for them to be able to afford the house, they’re making cuts in parts of their lives and needs in other areas.”

While affordable housing has not emerged as a key issue in the federal election campaign, the parties have addressed it in different ways in their platforms.

The Liberals have promised to build 100,000 affordable homes over a decade.

The New Democrats are pledging to build 500,000 affordable housing units over that same time period, and exempt any organizations constructing those projects from having to pay GST or HST.

The Green Party wants to build 25,000 new units and renovate 15,000 units annually over a decade.

The Conservatives haven’t yet addressed the issue of affordable rental housing. Instead, their policy focuses on putting home purchases within reach for more Canadians.

That includes taking another look at the financial stress test for first-time buyers, and extending CMHC-backed mortgages from 25 to 30 years.

Boissonnault said a second-term Liberal government would continue on its current path.

“A re-elected Liberal government will do exactly what we demonstrated we were serious about in the first mandate, which is to continue the national housing strategy — $55 billion over 10 years to house 530,000 Canadians,” he said.

While the need is great, getting an affordable housing project to fruition is a complicated undertaking, involving funding from three levels of government.

Ali’s townhouse was built by Edmonton non-profit Right At Home Housing Society in partnership with the Westmount Presbyterian Church, which is leasing the land for a small amount of money.

Right at Home spent $2 million of its own money, which included some donations. The province kicked in $4 million. The only federal money for the project was $10,000 in seed funding from CMHC.

Federal grants depend on matching funds from provincial and municipal governments.

Governments also look for “shovel-ready” projects so organizations like Right At Home have to spend hundreds of thousands of dollars on land, permits, and designs before getting any funds.

Anne Stevenson, director of strategic initiatives with Right At Home, said that means there needs to be a lot of coordination.

She said the federal government could make it easier for groups like hers by giving direct grants.

“Being able to streamline that process for our organization would really help up bring more product online,” Stevenson said.

She said the government could also set aside surplus federal land for affordable housing.

Current funding is tied to brand-new projects, but Stevenson said the federal government should consider offering grants for non-profits to buy existing buildings to turn into affordable housing.

“We find the costs per unit typically tend to be a bit lower and it’s a great way to be providing affordable housing in all neighbourhoods where land might be scarce.”

Hard to find housing without help

Before she was accepted into affordable housing seven years ago, Ali had a hard time finding a place she could afford.  She lived for a while in an affordable housing project along 107th Avenue but didn’t feel it was safe for her children.

“Finding housing was quite difficult because I was only one income working at the time, so whatever I make almost would go to my rent,” she said.