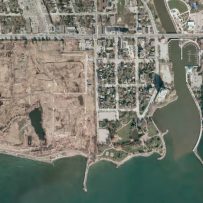 TOPCA said yesterday that it received notice from Imperial that the oil company had inked a deal to sell the land to the the corporation, a joint venture between the Kilmer Group, Dream Unlimited Corp., Dream Hard Asset Alternatives Trust, DiamondCorp, FRAM Building Group Ltd. and Fieldgate.

The brownfield site totals 74 acres, reports Mississauga.com, and includes additional water lots jutting out onto Lake Ontario, according to insauga.com.

It was the subject of a public consultation process called Inspiration Port Credit to help the city develop a development framework for the shoreside land.

In spring 2015, Imperial announced a call for proposals for the redevelopment of the site and selected finalists earlier this year.