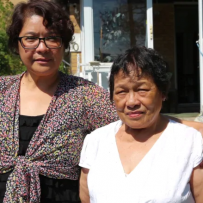 When the Landlord and Tenant board ordered the eviction of a tenant living in the basement of the Diaz family home in Scarborough, Sherr Marie Diaz thought her fear and anxiety were finally over.

“I can’t do this anymore. Like, every day I fear for my mom,” said Diaz, whose mother Josephine, 74, is the landlord.

Diaz and her mother are both fearful of the tenant, who they say has refused to stop smoking, even after being told it endangers the health of the Diaz family. They also say the tenant has been aggressive toward them.

But they’ve quickly learned no evictions would be enforced due to a moratorium brought in by the provincial government because of COVID-19, so people can continue to shelter in place.

“We feel like we’re prisoners in our own home because we cannot do anything.”

The Landlord and Tenant Board (LTB) ruled the tenant’s smoking impaired the safety of Diaz, her mother and her 78-year-old father Juan Diaz, who had chronic obstructive pulmonary disease. He died just weeks after the eviction notice was first served to the tenant, after being hospitalized.

Diaz’s mother is one of two Toronto landlords who are speaking out after they’ve failed to evict tenants they say have put their safety at risk during the COVID-19 pandemic.

The Ontario government implemented the moratorium in March. While LTB hearings are still being held in cases where there is a threat to safety or illegal activity, evictions can’t be enforced.

There is a process to appeal the moratorium in certain cases, but it involves seeking permission from the courts and requires a lawyer.

Diaz said the problems with the tenant started not long after he moved in this past January. She claims not only did he stop paying rent, but that he also began smoking in the unit.

Diaz told CBC News she repeatedly implored the tenant to stop lighting up.

“I keep on pleading  … but nothing happened …,” said Diaz, who said the tenant denied he was smoking in the house.

On April 4 — during a night when Diaz said they could smell the smoke — she said her father experienced shortness of breath and coughing, which she believed to be an asthma attack. It got worse and on April 5 she said she reluctantly took him to hospital, a process complicated by his Alzheimers and vascular dementia.

As well, he couldn’t have visitors because of the pandemic.

“I wasn’t there to tell him, ‘Don’t touch your face, don’t touch your nose. Don’t remove your mask.’ He’s there by himself. He doesn’t know the consequences of that,” Diaz said.

He was discharged but hospitalized again a few days later. On April 25, Jose Diaz died in hospital. Sherr Marie Diaz said he tested positive for COVID-19.

“I didn’t even say goodbye,” said Diaz, fighting back tears.

Because of the pandemic, the LTB is only hearing urgent cases involving illegal acts or serious safety concerns. The Diaz family successfully applied for a hearing in May, arguing the safety risk posed by the tenant.

An eviction order was granted on May 25.

“The Tenant has seriously impaired the safety of others by smoking marijuana in a house with oxygen tanks. There is a risk of a fire or explosion,” an adjudicator found.

“The Tenant further impaired the safety of the Landlord and her husband, as they were at risk of asthma attack.”

Despite the order, the tenant has not moved out, and because of the moratorium the order can’t be enforced. Both Josephine and Sherr Marie Diaz said attempts to confront the tenant have prompted him to become more aggressive.

“As long as he is here we can’t live peacefully,” said Josephine Diaz.

Mary Denbraber, 91, was also granted an order to evict her downstairs tenant but he has not moved out.

Denbraber — who cannot walk — said because of her deteriorating health, she wants to move into the downstairs unit of the home. She argued she cannot climb down the stairs on her own in the event of an emergency and cannot navigate a wheelchair through the narrow halls upstairs.

According to documents, the LTB supported her application in February for eviction and ruled the tenant should move out before April 30.

“At last, they saw it was not safe for me to be upstairs,” said Denbraber.

But Denbraber said not only is the renter not vacating, there are a lot of people visiting the tenant in the home, which has a shared entrance. She’s now fearful that either she or her support workers will be exposed to the novel coronavirus.

“Twice a day, health workers come to feed me and help me … They come in and the hallways are teeming with people half the time,” said Denbraber.

“Of course they are in danger.”

It’s possible to apply for an exemption from the moratorium through the Ontario Divisional Court, but advocates say it takes both time and money.

“In Ontario, lawyers are the ones that are able to go to Divisional Court and represent clients,” said Diana Padierna, a community legal worker with Landlord’s Self-Help Centre, a legal clinic funded by Legal Aid Ontario.

“And a lot of the small landlords — which is the client population that we help at the clinic — they’re not able to afford paying a lawyer, so they’re pretty much on their own.”

Lawyer Ike Awgu represents both Denbraber and the Diaz family.

“It is without a doubt there are many Diaz families out there where someone has suffered some sort of trauma because they couldn’t remove a dangerous person from their property,” said Awgu.

“It’s important that our decision makers are very wary of unnecessarily extending this moratorium.”

In a statement to CBC Toronto about the moratorium on evictions, the Ministry of Housing said in part:

“We are ensuring individuals and families are able to stay in their homes during this difficult time and can put their health and the health of others first.”

“If a landlord has concerns for their safety or suspects illegal activity is occurring in their property they should contact the local police,” the statement continued.

The Ministry of Housing wouldn’t say when the moratorium would be lifted or when regular hearings at the LTB would resume.

In the meantime, Awgu​​​​​​​ said he plans to file an appeal at Divisional Court for Denbraber’s eviction case.  He said he’s already filed paperwork for the Diaz family’s appeal and their hearing is scheduled for next Friday.

“We want our safety back — our peace,” said Sherr Marie Diaz.