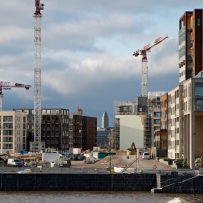 Most economists believe that this gets the causality backwards, and rents on existing apartments would have risen even faster if the apartment building hadn’t been built. But affordable housing activists don’t always find this convincing. In their mind, building more luxury housing only helps rich people, since lower-income consumers can’t afford to live in them.

Last month, a trio of Finnish economists published a new research paper that brings empirical evidence to bear on this important question. The Finnish government has a population register that collects data about where individuals live. The researchers got access to this data and were able to follow individuals as they moved from place to place in the Helsinki metro area. This data allowed them to trace exactly how the construction of new luxury apartment buildings in high-end neighborhoods impacted the broader housing market.

When a new apartment comes on the market, it starts a chain reaction. Often, the person who rents the new apartment is moving out of an old apartment in the same metropolitan area. That creates a vacancy that can be filled by another renter. That person, in turn, may be vacating a third apartment. These “moving chains” can extend for six or more steps, with Helsinki residents playing a game of musical chairs to find better or cheaper housing options.

This means that the Helsinki housing market isn’t divided into hermetically sealed tiers. The line between luxury and non-luxury housing is fuzzy, and people regularly jump from one housing tier to another. While few people jump directly from the poorest neighborhoods to the wealthiest ones, moving chains link these housing markets together. And this means that building luxury apartment buildings helps to make housing more affordable for everyone who rents, rich or poor.

At least that’s how it works in Helsinki. What about in the United States?

Over the last couple of years, Notre Dame economist Evan Mast has been doing similar research in American cities, and he published his latest results in July.

Mast looked at housing markets in 12 of the largest American cities. The US doesn’t have the kind of government population register they have in Finland, so instead Mast obtained data from a private marketing database called Infutor Data Solutions. But he used the same basic methodology as the Finnish economists and got similar—if a bit less dramatic—results. Thanks to moving chains, a new luxury apartment building created vacant units in a wide range of neighborhoods.

Housing policy experts have long talked about “filtering” as a process that creates affordable housing. The idea is that housing stock becomes less desirable as it ages, and older buildings become a kind of de facto affordable housing in cities with a steady supply of new homes.

Because filtering plays out over decades, it might seem like it has little relevance to addressing today’s housing shortages. But the new research on housing chains shows that new housing has a much more immediate impact on the lower rungs of the housing ladder. Building a new market-rate apartment building frees up space in older and less desirable neighborhoods in a matter of months, not decades.

But in reality these goals are not in conflict: building more market-rate housing exerts downward pressure on rents up and down the income scale. People who are truly concerned about housing affordability should cheer the construction of market-rate housing—including “luxury” apartments.